A different day in Tehran on a bookstore crawl 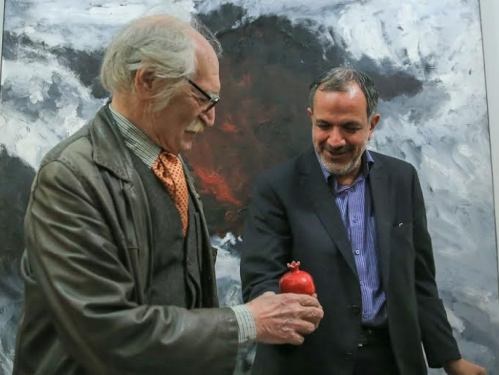 The former chairman of Tehran City Council calls on people to go to different bookstores in a bid to promote book reading.

A host of people, including the big names of art and culture, went to bookshops and publishing houses on Thursday [November 20] to both buy books and have a chat with book lovers.

Khabaronline filed a report on November 21 on an initiative by Ahmad Masjed Jamei, culture minister under President Khatami and a former Chairman of Tehran City Council who was replaced by Mehdi Chamran back in September, in support of book makers, publishers and distributors. The following is the translation of part of the report:

The plan dubbed “Bookstore Hopping”, which came after a call by Masjed Jamei on people from different walks of life to appear in bookshops, is meant to support those involved in the book industry and encourage book reading in society.

Masjed Jamei started his day on Revolution Street, which is the capital’s bookstores center, and was joined by some big names forming a group of bookstore hoppers.

At Farhang Moaser Publishing House Masjed Jamei was welcomed by a group of people among them Mahmoud Dowlatabadi, a famous writer who was awarded France’s Chevalier of the Ordre des Arts et des Lettres last week. There the veteran writer told Masjed Jamei: “In my lifetime I have never waited five hours for anybody, but I did it today out of respect for you.” He also praised the initiative.

Bookstore Hopping is the second initiative by the former chairman of Tehran City Council. Earlier Masjed Jamei put forward a Tehrangardi (Tehran Tour) plan [during which he stopped by different places in the capital to visit the known locations and discover unknown attractions.]

In a ceremony to open a publishing house Masjed Jamei thanked Minister of Culture and Islamic Guidance Ali Jannati for answering his call to go to bookstores in the city of Qom.