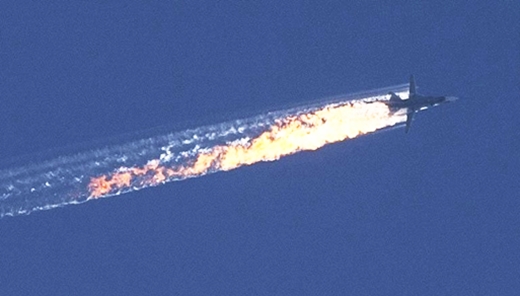 Russia cuts scientific ties with Turkey; Turkish submarines shadow Russian cruiser; and President Erdogan does not say whether he will apologize or not.

The shoot-down on November 24 by the Turkish Air Force of a Russian warplane in disputed airspace has soured relations between Ankara and Moscow.

The following is the translation of four brief news stories the official Islamic Republic News Agency released on December 1 on what has transpired in relations between the two countries:

As part of plans to impose sanctions on Turkey ordered by President Putin, Moscow cut its scientific ties with Ankara.

The decision announced Tuesday pulls the plug on a major section of non-economic ties between the two countries which covers cooperation between academic institutes and publishing houses, joint research and modern technologies.

Two Turkish Navy submarines have begun tracking Russian Cruiser Moskva which is providing cover for a Russian airbase in the Syrian city of Latakia.

The tracking takes places near Syria’s maritime border in the eastern Mediterranean.

The Emirati daily Albayan quoted the UAE foreign minister as slamming Turkey’s shoot-down of the Russian bomber as a terrorist act.

The comments of the Emirati top diplomat came on the sidelines of a Russia-UAE Joint Cooperation Meeting in Abu Dhabi.

President Erdogan tight-lipped on apology to the Russians

Turkish President Recep Tayyip Erdogan, who had vehemently refused to apologize to the Russians for the downing of the aircraft immediately after the deadly incident, on Monday opted for silence when asked whether he would issue an apology.

Erdogan, who was in Paris for a climate conference, said nothing and walked out of the room where he was answering reporter questions when the translation of the question a Russian reporter asked was over.