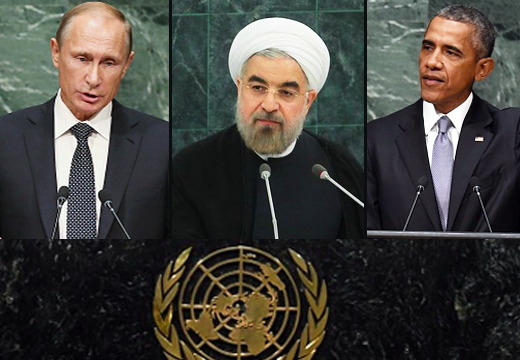 A sort of harmony was evident in the speeches of Messrs. Obama, Putin and Rouhani as far as the future of Syria was concerned.

An Iranian expert in international affairs has taken an analytical look at the addresses made by the US, Russian and Iranian presidents at the General Assembly, how they fared in their appearances at the UN and where they stood on efforts to settle the Syrian crisis.

Khabaronline.ir on September 30 published an interview with Ali Bigdeli, also a university professor. The following is the translation of what Bigdeli said:

The speech by the US president can be studied from two perspectives. The first angle has to do with eloquence and how to connect the subjects and topics. The US president had a good performance on that front.

The second part [which focuses on the subjects] came with conflicting remarks. What Mr. Obama said in his address, especially about Russia, Iran and Cuba, does not conform to US policies. For instance, Mr. Obama said that the US was not seeking to isolate Russia, but this is what is exactly happening on the ground.

As for Iran and Cuba, his rhetoric was less fiery, but his words on Russia were more pointed. On top of that, Obama’s comments such as “[…] is what allowed us to become the most powerful nation in the world”, and “[…] I lead the strongest military that the world has ever known […]”, etc.” were not in keeping with the core of his speech.

We’ve witnessed that the US administration has recently adopted a more flexible approach toward the Syrian situation. Washington earlier lent support to any solution to the Syrian crisis which would lead to the departure of Assad from office, but now the United States has agreed to put the fight against ISIL ahead of the presence or absence of Assad [in the future of Syria].

President Putin’s UN speech was heroic. In his address, Putin organized a show of force suggesting that the US cannot settle the problems and crises by sidelining Russia. On Syria, Mr. Putin said that Russia should be part of any plan to defuse the crisis there. In fact, Putin has put the US in a tight corner. The US has come to realize that it cannot keep up the fight against ISIL without Putin’s help.

The developments in Crimea and Eastern Ukraine can be explained in the same manner. All in all, I think Putin performed well in his UN General Assembly address thanks to Russia’s new position in regional equations.

Iran’s president did a perfect job at the UN General Assembly. It was obvious that Mr. Rouhani sought to speak cautiously about different topics and avoid aggressiveness and going to extremes. This approach is in the best interest of Iran. Any radical views by Iran would benefit Israel.

In his speech, Mr. Rouhani focused on three questions. Firstly, he announced that the Joint Comprehensive Plan of Action (JCPOA) is a closed question and now Iran has opened its doors to the whole world.

Second, the president discussed the unjust sanctions imposed on the country. Third, he said that the decisions made on the Middle East’s crises and problems are not feasible and cannot be implemented without Iran having a role.

Since the Iranian and American delegations had repeatedly announced that they had no plans for a meeting between the Iranian and US presidents, this encounter [between Foreign Minister Zarif and President Obama] was not a preplanned contact.

Mr. Zarif is well versed in the principles of diplomacy and consular etiquette. When Mr. Zarif ran into Obama in the UN corridor, he could not have made a U-turn. The diplomatic protocols required the two to shake hands.

The critical comments some have made at home are baseless. These criticisms have been leveled [at the foreign minister] out of spite and are mere excuses. Issues between Iran and the US are so much complicated that an accidental handshake can do little to solve them. We need to evaluate the handshake as a measure taken out of respect and courtesy.