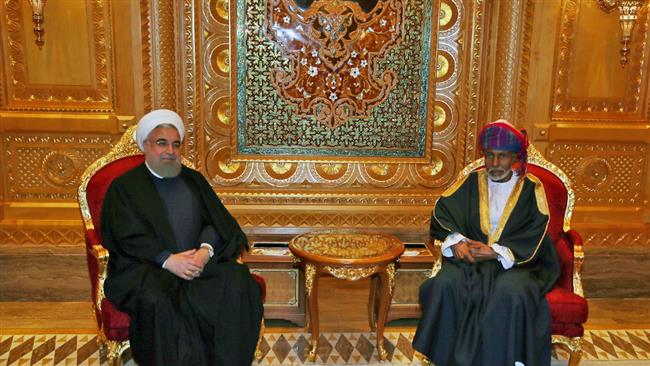 Iranian President Hassan Rouhani says the common enemies of Islam and the regional Arab countries have been propagating Iranophobia while Tehran’s power has always served peace.

“Tehran has always been the harbinger of the settlement of problems and differences through dialogue, and Iran’s military might is solely defensive and supports regional security,” Rouhani said in a meeting with Oman’s Sultan Qaboos bin Said Al Said in Muscat on Wednesday.

The Iranian president stressed that the region’s security could be guaranteed only through cooperation among regional countries.

“Therefore, regional countries need to stand by each other and cooperate for the sake of lasting stability and security in the region,” he added.

Describing Iran and Oman as the “guardians of the Strait of Hormuz,” Rouhani underlined the two countries’ role in safeguarding the security of the region and the strategic route for international trade.

He also welcomed the expansion of ties between Iran and other countries of the region.

Iran has come to the help of regional countries whenever they were entangled in challenges, including terrorism, and will continue to render assistance to them if they demand it, the Iranian president added.

The Iranian president also described Muscat-Tehran relations as “friendly and deep-rooted,” and welcomed the promotion of ties in different sectors, including economy, transportation, energy and trade.

Touching on the conflicts in the region, including in Yemen, the Iranian president described the situation in the impoverished Arab state as “very grave” and called for serious action to address the issue.

“The Muslim countries of the region are all duty-bound to take… measures to help the oppressed people of Yemen,” Rouhani said.

The establishment of a ceasefire, the delivery of humanitarian aid and intra-Yemeni talks are the key to ending the crisis in the country, he added.

Sultan Qaboos, for his part, welcomed the expansion of ties between his country and Iran in the political, economic and cultural sectors.

He praised Iran’s resolve to hold amicable ties with its neighbors and promote regional cooperation, saying such a policy would serve the region’s peace and security.

The Omani ruler added that the countries of the Persian Gulf region had a “prime responsibility” to restore regional security through “consultations.”

Rouhani arrived in Muscat on Wednesday to discuss the promotion of ties with the Persian Gulf Arab country. After meeting Sultan Qaboos, Rouhani left Muscat to hold talks with Kuwaiti officials.

During a meeting with Kuwait’s Emir Sheikh Sabah al-Ahmad al-Jaber al-Sabah in Kuwait City, Rouhani stressed that the two countries have close political ties and that their economic relations must follow suit.

“Iran is fully prepared for the development all-out ties, including joint investments in diverse projects, with Kuwait,” he said.

For his part, Sheikh Sabah stressed that his country is adamant to increase relations with Iran in all fields.

The Iranian president’s one-day tour of the two countries comes less than a month after Iran received a message from the Kuwaiti emir on relations between the Islamic Republic and Persian Gulf Arab states.

The one-day visit by Kuwaiti Foreign Minister Sheikh Sabah al-Khalid al-Hamad al-Sabah to Iran was the first by a senior official of a Persian Gulf Arab state to the Islamic Republic after relations between Tehran and some of the Arab countries of the strategic region became tense when Saudi Arabia unilaterally severed its diplomatic ties with Iran.

Iran has already stressed that it is ready to cooperate with regional countries, including Saudi Arabia, on regional problems.