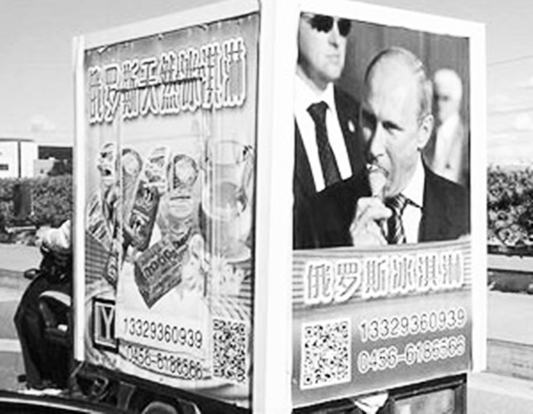 Chinese businessmen, enthusiastic over Vladimir Putin’s gift to President Xi of a box of ice-cream, have started using the image of the Russian leader in their advertising for items produced in Russia.

“Every time I come to Russia, I always bring Russian ice-cream home with me. Your cream is better, and that’s why it tastes so good,” the Chinese President said, as reported by the Russian online magazine Vzglyad and covered by Al Alam News Network.

Russian ice-cream became a popular treat in China in the last few years. And after such a PR campaign, it has an even greater chance to conquer the Chinese market of almost 1.4 billion consumers.

Chinese ice-cream salesmen continued the marketing launched by Putin, with an unusual advertisement. An image of the Russian leader eating an ice-cream cone appeared on mini-trucks in the Chinese region of Heihe, bordering with the Russian city of Blagoveshchensk, according the newspaper.

The image of Putin is quite popular even without the ice-cream story, and the Chinese started using it a long time ago to advertise their goods. For example, a huge banner at the chocolate shop in Harbin is decorated with the portrait of the Russian leader. According to the newspaper Novye Izvestia, the portrait of Putin appears on real estate advertising in some places.

The Chinese are not the first to come up with the idea of using Putin images for commercial purposes.  It’s been done in the West and in Russia itself. For example, at a Paris fashion week, the German fashion house Talbot Runhof presented a collection of T-shirts depicting the Russian President against a background of pictures of four world fashion centres: Paris, New York, London and Milan.

The Italian company Caviar produced a limited edition of gold cases for iPhones decorated with Russia’s coat of arms, Putin’s portrait and quotes from the Russian anthem.

After the reunification with Crimea, the image of Putin began even more popular: lots of souvenir gifts with images of Putin, his autograph and quotes have appeared on clothing, dishes and phone covers – although the president disapproves of his image being used for commercial purposes, according to his spokesman Dmitry Peskov.