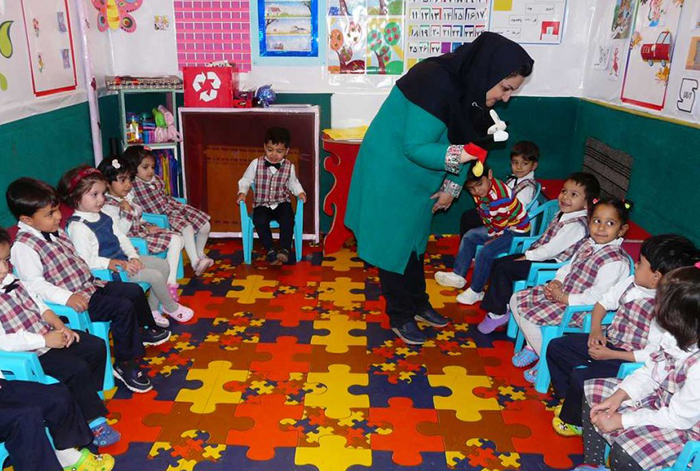 The growing number of child sexual assaults in Iran has convinced the government to introduce a bill in the Parliament on teaching sexual issues in kindergartens and pre-schools.

Little innocent children are sitting on red chairs with wide eyes and gaping mouths, listening attentively to the words coming out of their kindergartener’s mouth. They call her Khaleh Sima [aunt Sima]. She holds an MA in child psychology.

Sima has two teddy bears at hand; a big one and a small one. She turns to the small bear and asks, “Tell me my little bear girl! When uncle bear comes home and you go sit on his lap to get a yummy chocolate, where on your body isn’t he allowed to touch?”

After everyone heard the question clearly, the small bear points to the private parts on her body.

Then, Khaleh Sima asks a little girl named Gelareh about the ones who are allowed to shower with her. Gelareh, to show emphasis, raises her voice a little bit and replies immediately, “Just my dearest mom and grandma, and if they were not around, I shower with my daddy.”

The training takes 20 minutes every session.

Sima refers to the tragic incident that happened to her little cousin by an old family friend as the driving force behind the beginning of these classes.

“The man, called Meisam, was an old friend of my aunt and her husband. They used to spend almost all the weekends together. After a while, they noticed that their 6-year-old daughter was developing symptoms of extreme physical weakness,” Sima said.

Her cousin was hallucinating when sleeping and after several counselling sessions, she finally revealed the secret when she said, “I don’t really like the games uncle Meisam plays with me!”

They trusted Meisam so much that they would ask him to look after their daughter when they were busy or they would let him take her to the park. However, all these times he was wickedly molesting the poor Gelareh.

Sima said the appalling incident completely destroyed her aunt’s life; therefore, she made a firm decision to do something about it.

“I went to the Ministry of Education and Social Welfare Organization and filed a petition to hold these classes, but they rejected my request,” she went on to say.

“I paid visits to sporadic kindergartens in different areas of the city and shared the story with all of them. I have already signed several contracts with different kindergartens to hold sexual abuse prevention classes.”

Sima suggested that parents usually frown upon such training courses at kindergartens, but she firmly believes that serious attempts should be made to change this austere way of thinking.

After several cases of sad child abuses, especifically following the sexual harassment of an Afghan girl named Setayesh in Varamin County south of Tehran, who was brutally killed afterwards, the good news is that the authorities heard the wake-up call after all.

In an interview with Sharq daily newspaper, Siavash Shahrivar, the Director General of Tehran’s Social and Cultural Affairs, said, “Teaching children about child sexual abuse prevention in kindergartens and pre-schools is supposed to become a law in the near future.”

“The bitter incident of the rape and slaughter of a six-year-old girl in Varamin prompted the government to feel the need to educate children about sexual issues,” Shahrivar noted.

He introduced a plan that enlightens children about private parts of their bodies and said, “Children take these classes in kindergartens and pre-schools to acquire sufficient maturity and learn the difference between playing games and sexual abuse.”

“We reached out to university professors to come up with a practical solution for our problem, and finally found that a professor from Tehran’s Allameh Tabataba’i University had authored a comprehensive and prolific book on sexual abuse while observing our red lines,” Shahrivar noted.

A contract was inked with the professor to extract excerpts from his book and teach them in kindergartens and pre-schools, he noted.

In an interview with Shargh, Raziyeh Miraninejad, a child psychologist and faculty member in Shahid Beheshti University, elaborated on the training courses of sexual abuse prevention.

Miraninejad laid emphasis on the rules and regulations of teaching in such classes and said, “To familiarize children with the dos and don’ts of sexual issues, you should either be an expert or have an intimate relationship with them; therefore, teaching the parents might be even more important than teaching the children.”

Parents need to be careful about the language they use to talk to their children and always pick beautiful words in their speaking, especially when their children are around, she added.

According to Miraninejad, children’s sex education starts when they become three years old.

“When your child asks a question about sexual issues or is exposing his or her private parts carelessly, parents should seize the opportunity to teach them lessons,” she stressed.

Miraninejad went on to say that children should never feel shy about the private parts of their body because if they feel so, they would refrain from telling their parents if an abuser has crossed the red line.

“Children should learn that no one is allowed to touch them on their private parts simply as they never allow anyone to touch their tongue or poke their ears.”

When asked about the parents’ role in helping their children recover from the abuse, she described two reactions as soul murderer.

“Parents should be alert to avoid these two reactions; first, to ignore them and second, to attack them.”

The trauma of childhood sexual assault is almost incomprehensible.

“If parents realize that their child has been a victim of sexual assault for several times, psychological interventions can offer big help. The children educated in the field of sexual abuse prevention are less vulnerable than the uneducated ones,” Miraninejad said.