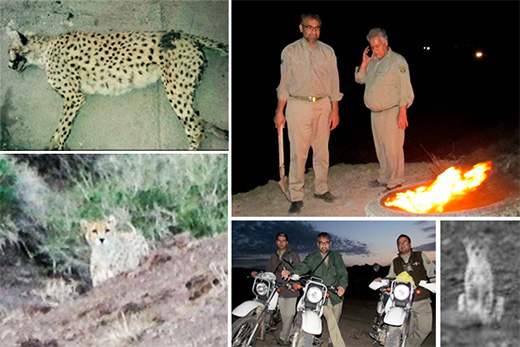 On Wednesday night, May 11, a female cheetah unfortunately died in a collision with passing vehicles on a road between Semnan and Mashhad, near Turan National Park.

Cameras in Miandasht Wildlife Refuge Association captured the first image of this cheetah with her three cubs in 2012.

Her fate had remained unknown from 2013 until last year, when she was again caught by camera traps, and had proved to be a successful mother. Very probably, she was with her cubs born last year, which had not reached the age of independence by the time of the accident.

Patrols searched for her cubs near the accident site until evening. Finally, with the efforts of guards and some volunteers from a surrounding town, a cheetah cub was found.

According to Iran Environment and Wildlife Watch, the cheetah cub was about 10 months old and is unlikely to be able to hunt and continue living in the wild without the support of its mother.

After nightfall, the cheetah would have likely moved towards the road to find its mother, which could have caused accidents with passing vehicles. For this reason, guards spent the whole night trying to prevent the cub from approaching the road by burning tires.

At 4am, wardens started patrolling the site in which the cub had been seen, finding it near the road at around 5:30am.

A group of guards tried to surround the cheetah cub and corral him towards the sanctuary of the National Park. Unfortunately, seeing the guards, the cub fled into the mountains.