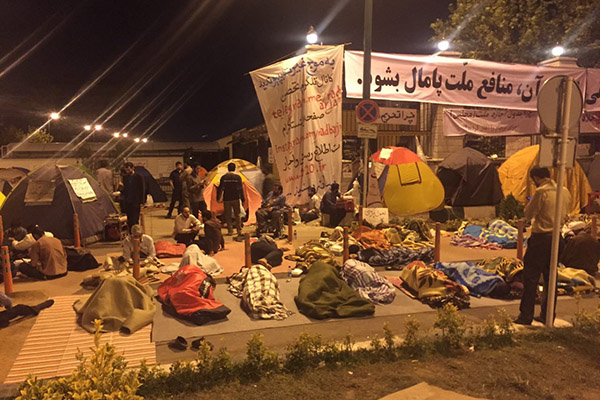 A small group of the former president’s supporters have staged a sit-in outside parliament to protest against the conclusion of the Iran nuclear deal.

A group of Worriers [supporters of former President Ahmadinejad’s policies and critics of President Rouhani’s foreign policies, especially his nuclear approach] are still in their tents outside parliament in protest at the conclusion of the Iran nuclear deal.

This comes as Tehran’s governor has said that the gathering outside the Islamic Consultative Assembly is illegal and Tehran police have asked the protestors to break up. The Worriers staged a sit-in on Monday (September 28) and launched a website to cover their protests.

The protesters have also installed banners some of which read: JCPOA is the Trojan Horse of the US; Why an agreement, if sanctions are not to be lifted?; and The result of two years of [nuclear] negotiations: Sanctions will not be removed!.

The following are the images Entekhab.ir released on Saturday (October 3) of the illegal sit-in by the Worriers: