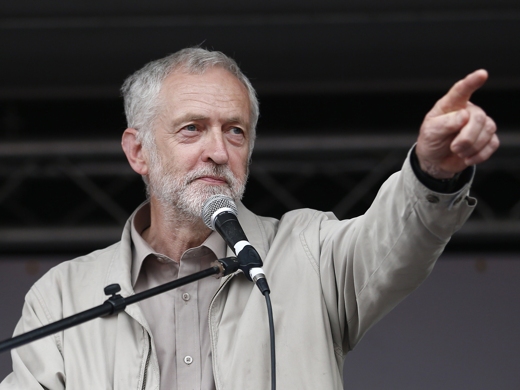 Corbyn is a staunch advocate of the people of Palestine, blames the 2008 world economic crisis on banks and favors negotiations with Iran, Hezbollah and Hamas.

Members of the British political aristocracy are in a state of panic after Jeremy Corbyn secured a landslide victory in the Labour Party leadership contest. His victory even met with harsh reaction from Prime Minister David Cameron who said he is a threat to the country’s national security!

On September 14, Kayhan daily published a report on the newly-elected leader and the reactions his victory has drawn from different British politicians. The following is the translation of that report:

Emergence of an individual who holds dramatically opposite opinions to those of British politicians has raised deep concerns in the country’s economic and political circles. Jeremy Corbyn won 59 percent of the votes in a Labour Party election on September 12. He finished ahead of four other rivals in the race for the Labour leader.

Corbyn, who has nothing in common with regular British leaders, wears a beard, does not wear a tie, is a staunch advocate of the oppressed people of Palestine, is opposed to austerity plans, blames the 2008 world economic crisis on banks and favors negotiations with Iran, Lebanon’s Hezbollah and Hamas.

He supports revolutionary figures, particularly those of Latin America, leads a simple life and does not drink.

Although he is popular with a large number of the youth, his entry into the club of political elites has stoked concerns among conservatives, and right-leaning media and free market advocates have launched a barrage of criticism against him.

On popularity of Corbyn, former British Prime Minister Tony Blair said, “When people say: ‘My heart says I should really be with that politics’, get a transplant.” Corbyn has suggested that Blair be tried for war crimes for the 2003 invasion of Iraq.

Supporters of Tony Blair within the Labour Party who identify themselves as moderates have said that the “virus” of Corbyn’s mentality must be contained. They have even attacked the party by saying “Labour has taken leave of its senses” by voting for him.

The 66-year-old leader who has 32 years of partisan activities under his belt has drawn the criticism of David Cameron too. Although the prime minister called Mr. Corbyn to congratulate him on his victory on Saturday night, he had earlier said that his leadership of the Labour Party would threaten the British national security.

Cameron also denounced Labour as “a threat to our national security, economic security, and your family’s security”.

Jeremy Corbyn is a vegetarian who does not drink. He doesn’t usually wear a suit or tie. He cycles or gets the bus to work, carrying a backpack and wearing sandals. He does not have a car and lives in an ordinary house in an ordinary neighborhood. His name is always among those who spend the least amount in the annual report on MPs’ expenses.

Now that he has taken the helm at the Labour Party, we should wait and see whether he will be elected prime minister in the next general elections.