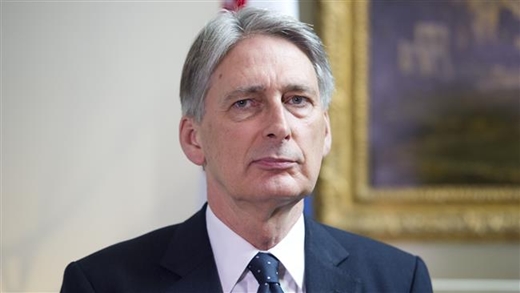 Britain’s foreign secretary has arrived in Tehran for a two-day visit during which he will attend a ceremony to reopen the British embassy in the Iranian capital.

British Foreign Secretary Philip Hammond has arrived in the Iranian capital, Tehran, for a landmark two-day visit to reopen the UK embassy.

Hammond arrived in Tehran on Sunday at the head of a high-ranking politico-economic delegation to attend the reopening ceremony of the British embassy in the first visit to Iran by a British foreign secretary since 2003.

The Iranian embassy in London will be also reopened at the same time in the presence of Iran’s Deputy Foreign Minister Mehdi Danesh-Yazdi.

The reopening of the British embassy is seen as the biggest shift in the West’s policy toward Tehran after Iran and P5+1 reached a nuclear agreement in Vienna in July.

Iran and the six countries – the United States, Britain, France, Russia, China and Germany — succeeded in finalizing the text of the nuclear agreement called the Joint Comprehensive Plan of Action (JCPOA) on July 14.

Britain shut down its embassy in Tehran in November 2011 and withdrew its diplomatic staff after hundreds of Iranian students staged a protest outside the British embassy in Tehran against the expansion of UK sanctions on Iran, pulling down the UK flag and demanding the expulsion of the British ambassador.

In late November 2011, Iran’s parliament approved a bill to downgrade the diplomatic ties between Tehran and London to the level of chargé d’ affaires, and limit all economic and cultural collaborations to the minimum level.

Nearly two years after their diplomatic ties were severed, Iran and Britain agreed in October 2013 to appoint non-resident chargés d’ affaires as a first step toward reestablishment of their ties.