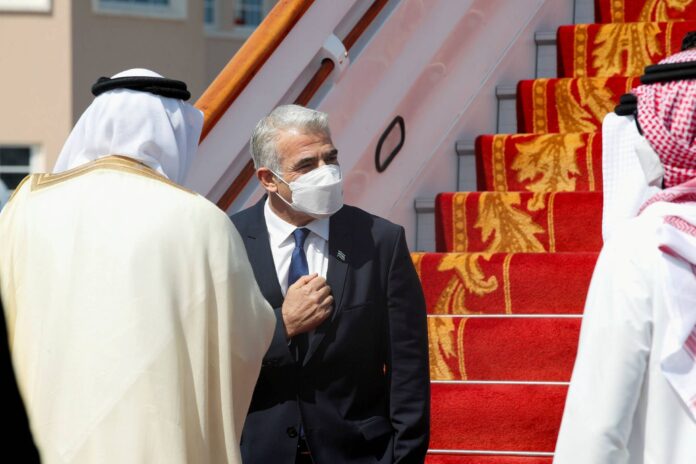 Demonstrators have poured into the streets of Manama, the capital city of Bahrain, to protest the Israeli foreign minister’s visit to the tiny Persian Gulf country.

An Israeli foreign ministry statement said Lapid, who had been invited by his Bahraini counterpart, will inaugurate the Israeli embassy in Manama on Thursday and is “expected to sign a list of bilateral agreements”.

“This will be the first official visit by an Israeli minister to (Bahrain),” the statement added.

The deals enraged the Palestinians, who felt a betrayal of their national cause. They saw it as an abandonment of a longstanding commitment in the Arab world not to normalise relations with Israel until there was progress in resolving the decades-long occupation of Palestinian land.

Protesters burned tyres on the outskirts of Manama early Thursday, sending clouds of black smoke into the air, and the hashtag #BahrainRejectsZionists in Arabic was circulating on social media.

Extra security was stationed on the route to the airport and no Israeli flags were visible on main roads. Opposition activists have called for further protests later on Thursday.

Since the normalisation agreements, known as the Abraham Accords, were signed, ties have expanded between Israel and its new Gulf partners, notably including direct flights and economic deals.

Lapid is the main architect of the Israeli coalition government that removed ex-premier Benjamin Netanyahu, who signed the Abraham Accords.

Lapid has also visited the UAE and Morocco since becoming foreign minister in June.

The Israeli delegation to Bahrain arrived in earlier this week and joined the country’s tiny Jewish community in marking the Jewish holiday of Simchat Torah.

Lior Haiat, spokesman for the Israeli Foreign Ministry, said it was the first time in over 75 years that the community could mark the holiday in its synagogue.

“The fact that we could celebrate it yesterday was a very joyful event for us and for the community as well,” he added.