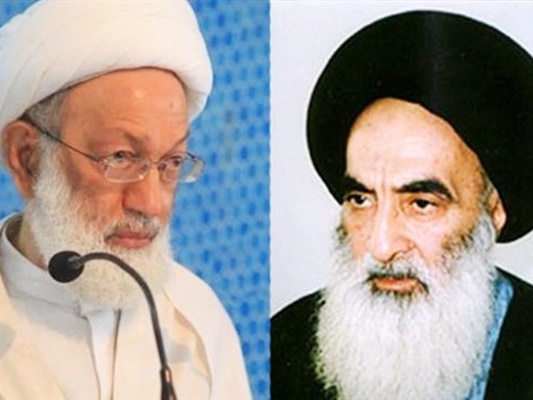 In a telephone conversation on Thursday, Ayatollah Sistani expressed solidarity with Sheikh Qassim, whose citizenship was revoked by the Manama regime earlier this week.

“You are in the hearts and what has occurred will not harm you,” Ayatollah Sistani told Sheikh Qassim, according to Lebanon’s Al-Manar television.

The senior cleric stressed that he would use all means to preserve Sheikh Qassim’s rights.

On Monday, Bahrain’s Interior Ministry accused the Persian Gulf island’s most prominent Shiite cleric of seeking the “creation of a sectarian environment” through his connections with foreign powers.

The move has raised fears of further unrest in the Arab country which is already the scene of regular anti-regime demonstrations.

The latest measure by the Bahraini regime against the Shiite cleric came less than a week after the Bahraini Justice Ministry suspended all activities of al-Wefaq National Islamic Society, the main opposition group in the country.

Al-Wefaq’s Secretary General Sheikh Ali Salman has been in prison since December 2014 on charges of attempting to overthrow the regime and collaborating with foreign powers, which he has denied.

The Al Khalifa regime is engaged in a harsh crackdown on dissent and widespread discrimination against the country’s Shiite majority. Scores of people have been killed and hundreds of others injured or arrested in the island country.