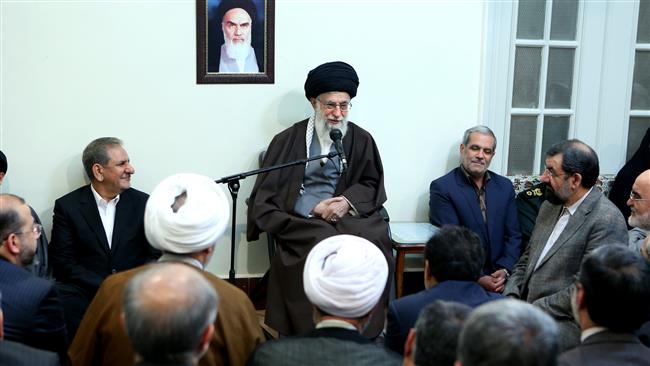 Leader of the Islamic Revolution Ayatollah Seyyed Ali Khamenei says the American officials have proven to be unreliable, noting that some Western governments are following in the footsteps of the US government.

Addressing a group of senior Iranian officials on Wednesday, Ayatollah Khamenei described the US as a symbol of dishonesty and peskiness, saying: “We cannot trust the Americans, and besides the Americans, some other Western governments are like that. Therefore we have to rely on our own capabilities and the American officials’ positions and performance endorse such a view.”

The Leader noted that Almighty God would assist the Iranian nation, if it embraces sincerity in its actions.

“In the course of personal and social life, there are always ups and downs and hardship and ease, but the important thing is that under all these circumstances, the main course and orientation must not be forgotten,” said Ayatollah Khamenei.

In another part of his speech, the Leader called on the officials to take the necessity of supporting domestic production seriously, saying, “Production in both industrial and agriculture sectors must be given serious attention.”

The Leader of the Islamic Revolution added that Iranian officials have always been united despite their differences of views.

“The Islamic Republic of Iran has always enjoyed the privilege of national unity, but alongside this national unity there must be unity and empathy among the officials and such unity is in no contrast with differences of attitudes and views,” said Ayatollah Khamenei.

The Leader called on Iranian officials of whatever attitude or view to move in line with the objectives set by the 1979 Islamic Revolution.

Ayatollah Khamenei also stated that “empathy and rapport and unity” among the officials will prepare the ground for the realization of the Economy of Resistance, noting: “Without cooperation among the officials, [country’s] affairs will not go ahead.”