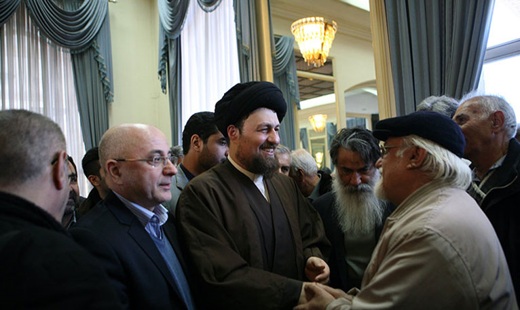 Grandson of the late Imam, Seyyed Hassan Khomeini, has said that it takes courage to enjoy freedom which is itself a must for art.

The grandson of the founding father of the Islamic Republic says there is no retirement for art and for those involved in it, underscoring that freedom is a necessity for art and it takes courage to secure freedom.

According to a February 1 issue of Arman-e Emrooz, Seyyed Hassan Khomeini made the comments in a meeting with veteran artists at the mausoleum of the late Imam Khomeini on Saturday. The following is a partial translation of what he told the crowd:

Art veterans serve as the teachers of the generations to come. The formation of a center for veteran artists by the Ministry of Culture and Islamic Guidance is a praiseworthy move.

The Islamic Revolution has reached out to art [to achieve its objectives] in four periods in its history: formation, victory, stability and flourishing.

The language of art has vast potential to stir human imagination – which is one of the differences between humans and other living creatures – nurture it, and take man on a historical journey.

A great novel, movie, music piece and poem inspire humans to empathize with others. They can also help people aim bigger and achieve more in their quest of values.

Illusion is the secret behind ethical collapse. It is just an illusion if I think the entire world revolves around me. This is the responsibility of art to help humans develop imaginations and understand others.

[Iran’s] Revolution was an ethical revolution for different reasons. The revolution needs art which in turn involves multiple things, among them love. […]

For its part, love is in need of freedom. Artists should be able to freely express love for what they admire. […] To enjoy freedom, courage is a must.

Revolution needs a plain, expressive language to stay alive; and that is nothing but the art’s intergenerational and intertribal language. […]

In a healthy society, peaks do not belong to the past; rather, people look ahead to see the peaks. […]

We’d better not envy what is gone; instead we should take pride in the past and set our sights on what will come next.