Arba’een March, a harbinger of peace for the entire world 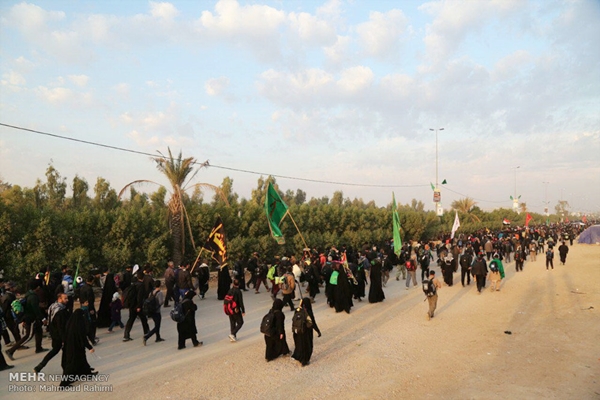 An Iranian sociologist says that Saudi Arabia, Israel and ISIS are all organs of a body which has survived thanks to the paradigms of Pan-Arabism and Pan-Judaism, stressing that the Arba’een paradigm can introduce a replacement for the unsuccessful paradigms of the present.

An Iranian university professor has said that the Arba’een March, which is a congregation attended by members of all Islamic denominations, can act as a messenger to promote peace among world nations.

Ebrahim Fayyaz, a professor of social sciences at the University of Tehran, made the comment in an interview with Mosalas, a weekly news magazine (the 289th issue) and added that the giant march can help challenge and refute the viewpoints of terror groups such as ISIS. During the extensive interview, Dr. Fayyaz took a sociological look at the reasons why the European youth are lured to join ISIS, the terror group’s notorious ideology, as well as the Arba’een March and its goals and message, violence in the name of Islam, and the exit strategies.

The following is PART ONE of the translation of the professor’s remarks on the Arba’een March and how it can cast doubt on the corrupt mindset of ISIS:

The Arba’een March which is attended by people from across the world signals the message of global peace. […] It is an event which demonstrates global peace to all nations. It is a violence-free march attended by all denominations.

If we seek to provide a paradigm for the world which has no sign of ISIS violence and introduce a replacement for the ideology promoted and espoused by Saudi Arabia, the Arba’een March would be a perfect choice. Since the 1970s, Saudi Arabia has promoted its own ideology in the world and the result has been ISIS and the Taliban.

In other words, this event [the Arba’een March] can be seen as something which [can] defeat the paradigm provided by Saudi Arabia. Wahhabism was the paradigm Saudi Arabia introduced. The Saudis did what it took to defy the discourse put forward by the Islamic Revolution, make it isolated and put its followers under pressure.

The Saudis supported Saddam’s acts of violence against Iran. What we see in Iraq today is matchless solidarity with Iran. One main issue is that Iraq wants to remove visa requirements for pilgrims, but Iran does not accept the offer, citing security concerns. Today Pakistanis, Afghans and people from Central Asia – there are a big number of the Sunnis among them – prefer to enter Iraq via Iran. This shows that Iran should be ready for the future.

This march is also a setback for the West as far as its paradigm is concerned. It can produce new mindsets. If you pay attention to the Easter Week, the peace rituals conducted by the Christians, you see that they hold a march. They believe that Jesus Christ (peace be upon him) carried the cross on his shoulders and was crucified during Easter.

Imam Hussein (peace be upon him) too marched a path which was thousands of kilometers long from Medina to Karbala. The path the Imam walked down was the path of peace, not war. Imam Hussein was not a warmonger; that’s why he brought his wife and children with himself. He brought his family to carry this message across: We have not come [to Karbala] to wage war and carry out massacre. We have come here for peace, an honorable peace based on ethical values.

Unfortunately these issues [Imam Hussein’s march and its objectives and message] have not been explained properly. They can lay out the paradigm(s) the world of Islam and the East have provided. On media and cultural fronts, we are still involved in primary issues. Islamic Republic of Iran Broadcasting (IRIB) and privately-run media [in Iran] have not addressed the question the way it deserves.

The Arba’een March can help disprove the theories proposed by ISIS, because think tanks of the Sunnis view Imam Hussein as the martyred caliph and believe that Muawiyah [bin Abi-Sufyan] and [his son] Yazid were among the diversions in the world of Islam. If the Sunnis call Imam Ali, Imam Hassan and Imam Hussein the caliphs, we should invite the Sunnis to take part in Arba’een March.

For sure, they [the Sunnis] will do what it takes when it comes to attending this ceremony and their actions will not be dwarfed by what the Shiites do. Take a look at the ceiling of Hagia Sophia – [a former Christian patriarchal basilica], a mosque [in Istanbul] which has been built in the Ottoman period – and you will see portraits of Imam Hassan and Imam Hussein alongside the Rashidun Caliphs [a term used in Sunni Islam to refer to the first four caliphs (successors) following the demise of the Muslim Prophet Muhammad, namely: Abu Bakr, Umar, Uthman ibn Affan and Ali].

Imam Hussein can contribute to efforts which aim to boost unity between the Shiites and Sunnis and take the place of the discourse of Wahhabism which was put forward in the 19th century. This discourse has been presented by Saudi Arabia, but the fact of the matter is that it was originally created by Britain.

Today the United States takes advantage of the division [provoked by the discourse of Wahhabism] to bolster the security of Israel. The paradigm presented by Israel, which is a 19th century regime created based on the 19th century violence and racism, has been debunked.

As a result, we come to the conclusion that Saudi Arabia, Israel and ISIS are all parts of a whole body which breathes thanks to the paradigms of Pan-Arabism [an ideology espousing the unification of the countries of North Africa and West Asia from the Atlantic Ocean to the Arabian Sea, referred to as the Arab world] and Pan-Judaism, but they are on the brink of decline.

They [Pan-Arabism and Pan-Judaism] are very much concerned about the Arba’een March and want to prevent it from being held. The West-leaning intellectuals, too, do not see the Arba’een March in positive light, because they have leanings toward the West.

Clarification of the Arba’een paradigm can introduce a replacement for the fall of the West which is a prelude to the collapse of the Western paradigm. This paradigm once collapsed when student movements were created in the US and France in the 20th century. But the US and France promoted immorality in universities and high schools – by which they allowed extramarital affairs, drinking, dancing and so forth – to put on hold this trend [student movements].

With the turn of the century a new situation is now prevailing. Building on the rationality of the Shiite school of thought, we do not kill humans, we do not offer a Fiqh-based justification for their blood and we interact with People of the Book [adherents of Abrahamic religions that predate Islam].