Any use or threat of using nuclear weapons crime against humanity: Zarif 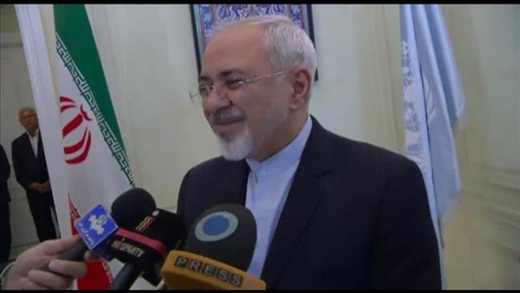 Foreign Minister Mohammad Javad Zarif has made a strong call for the complete exclusion of the use or threat of use of the nuclear weapons from military doctrines.

Iran’s foreign minister says the use of nuclear weapons or even the threat of use of such weapons is crime against humanity.

Mohammad Javad Zarif made the remark while addressing the 2015 Review Conference of the Parties to the Treaty on the Non-Proliferation of Nuclear Weapons (NPT) in New York on Monday.

“We firmly believe that any use or threat of use of nuclear weapons would be a crime against humanity and a violation of the principles of the Charter of the United Nations and international law, in particular, international humanitarian law,” he said.

The Iranian foreign minister made a strong call for “the complete exclusion” of the use or threat of use of the nuclear weapons from military doctrines.

“We express our dissatisfaction over the lack of required political will and effort by the nuclear weapons states to fully address the legitimate interest of all non-nuclear-weapon states parties to the treaty to receive unconditional and legally-binding security assurances against the use or threat of use of nuclear weapons under all circumstances pending their elimination,” he said.

Referring to a recent summit meeting of the Non-Aligned Movement (NAM) in Tehran, Zarif said heads of state taking part in the summit lent their support to creation of a zone free from nuclear weapons and other forms of the weapons of mass destruction in the Middle East while asking immediate accession to the NPT by all countries, which should bring their nuclear activities under the supervision of the International Atomic Energy Agency (IAEA).

He added that the NAM heads of state also expressed their concern about the activities of the Zionist regime of Israel, which pose a serious threat to neighboring countries in the Middle East, condemning that regime for the production of nuclear weapons.

Zarif, who was also speaking on behalf of the NAM, said the bloc considers nuclear disarmament as its “highest priority” and reiterates that “the existence of nuclear weapons poses the greatest threat to humanity.”

“The continued lack of progress in the implementation of nuclear disarmament obligations and commitments by the nuclear weapons states could undermine the objects and purposes of the [Non-Proliferation] Treaty and the credibility of the non-proliferation regime,” he said.

The Iranian foreign minister further stated that the implementation of the Plan of Action adopted by the NPT Review Conference in 2010 with regard to nuclear weapons, nonproliferation and peaceful use of nuclear energy is deplorable.

He added that to realize the goals of the treaty and to bolster international peace and security, the contents of the NPT should be implemented in full, without discrimination and in a balanced manner.

Zarif also emphasized the role of the treaty as “the essential foundation for nuclear disarmament and non-proliferation as well as for promoting international cooperation and assistance in support of the inalienable right of the state parties to peaceful use of nuclear energy.”

The Iranian foreign minister further criticized the countries that possess nuclear weapons for not making any progress in eliminating their nuclear arsenals.

“The role of nuclear weapons in their security policy has not diminished. Some are modernizing their nuclear arsenals and planning research on new warheads; others have announced their intention to develop new delivery vehicles for nuclear weapons,” Zarif said.

The Iranian foreign minister further called for “a comprehensive nuclear weapons convention which would include a phased program and a specified timeframe for the complete elimination of nuclear weapons,” adding that he has put forward a working paper entitled “Elements for a Plan of Action for the Elimination of Nuclear Weapons.”

Zarif said proliferation concerns are best addressed through “multilaterally negotiated, universal, comprehensive and nondiscriminatory agreements,” stressing that “additional measures related to safeguards shall not affect the rights of the non-nuclear states parties to the treaty.”

“Each state party in line with its national requirements and in accordance with the rights and obligations under the treaty has a sovereign right to define its national energy and fuel cycle policies including their inalienable right to develop for peaceful purposes a full national nuclear fuel cycle. Accordingly, the choices and decisions of each state party in the field of peaceful use of nuclear energy should be fully respected,” he said.

“We strongly reject and call for the immediate removal of any restriction or limitations on the peaceful use of nuclear energy including restrictions on export to other state parties of nuclear material, equipment and technology for peaceful purposes.”