An unconventional but balancing meeting 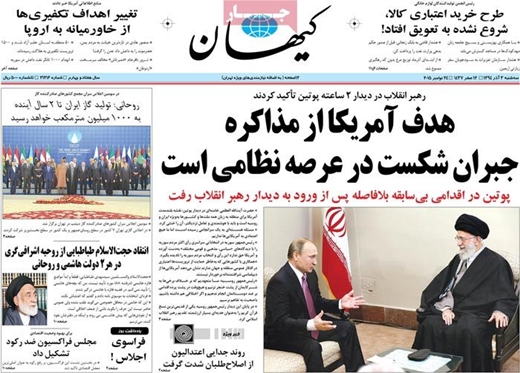 Kayhan daily has said that in his meeting with the Supreme Leader, President Putin acted as an international player with balancing power.

An Iranian daily has said that the Russian president met with the Supreme Leader in Tehran in the capacity of a balancer intending to reach common ground with Iran.

Hossein Shariatmadari, the managing editor of Kayhan daily, wrote in an editorial on Tuesday (November 24) that President Vladimir Putin who came to Tehran on Monday for a third summit of Gas Exporting Countries Forum (GECF) had a meeting with Ayatollah Seyyed Ali Khamenei to play his balancing role and consult with Iran’s leader.

The following is the translation of part of Kayhan’s editorial:

Upon arrival in Tehran on Monday, the visiting Russian president – in an unprecedented, yet meaningful move – went straight to a meeting with the Supreme Leader of the Islamic Revolution. […] The text of the two-hour talks between President Putin and the Supreme Leader which was released hours after their meeting showed that Putin’s decision [to immediately meet with the Supreme Leader] had been purposeful, and that the United States and its allies have had good enough reason to worry about [Putin’s trip]….

That the two sides decided not to [follow the proper diplomatic protocols] and hold a welcoming ceremony, and instead organize a meeting between President Putin and the Supreme Leader carried a clear, unambiguous message: Putin did not meet with the Supreme Leader as the president of a global power; rather, in his talks with the Leader, he – in the capacity of a balancer – sought to have consultation and exchange of views.

A look at the text of the talks between the Russian president and the Supreme Leader clearly drives this message home, although the message is clear even without referring to this text.

Over the past thirty-something years, the Islamic Iran – led by the late Imam Khomeini and the leadership of his successor – faced up to all plots, bullying, sanctions, military attacks and dozens of other covert and overt schemes of the US and its regional and European allies and managed to gain indubitable victories and achievements. Without doubt, Russia and any other regional and global powers can enter into talks with the Islamic Republic of Iran and make common decisions only from the position of a balancer. […]

Before his recent meeting with the Supreme Leader, Putin had had a record of practical measures in line with the declared policies of the Islamic Republic. That was an acceptable and ensuring introduction to continued cooperation [with Iran].

Iran-Russia cooperation in defiance of the proxy war waged by the United States and its allies against the Resistance Front – which is fighting [against the Israeli regime] in Syria and Iraq and is one of the critical questions in the region and around the world – has proved to be an acceptable experience in proceeding with such cooperation in a defined fashion.

An experience as such has turned into a nightmare for the Americans, and their Western, Jewish and Arab allies. As the Wall Street Journal has put it, “The Obama administration and European and Arab allies are seeking to peel Russia away from its alliance with Iran […]” or “If Russia holds fast to Iran and Mr. Assad, it would undermine hopes for an international [read the US and its allies!] consensus”.

There are still plenty of other examples [of their concerns about cooperation between Iran and Russia].