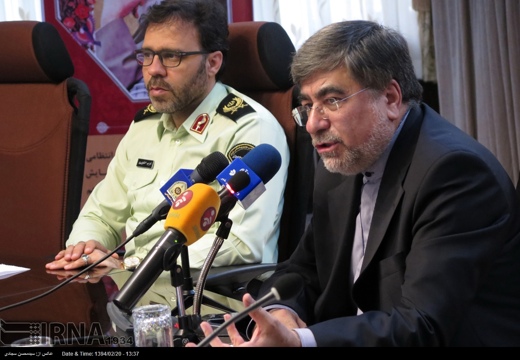 The Iranian culture minister has said that information cannot be limited, adding that alignment should be the government’s weapon of choice if it seeks to handle public opinion properly.

The minister of culture and Islamic guidance has said that the government needs to align with people if it seeks to better control and shape public opinion.

Ali Jannati made the remark in a gathering of police officials Sunday and added that media cannot be controlled and the flow of information cannot be blocked.

Ettela’at newspaper on May 11 published the minister’s remarks on public opinion and the ways to handle it in society. The following is the translation of excerpts of Jannati’s remarks:

The minister said technically speaking, media cannot be brought under control, nor do geographical boundaries and legal requirements allow for such control.

He added nothing can staunch the [free] flow of information and news.

Jannati further said certain pieces of information are exchanged through Viber and WhatsApp, either mutually or within groups, adding we cannot control or interrupt these exchanges.

The culture chief went on to say that production of [decent Internet] content is of immense significance when it comes to dissemination of information and molding public opinion.

“We need to [rush to the scene] and take over and produce materials. The more we produce information in cyberspace, the more we can affect public opinion [in society]”, he stressed.

To counter the [inaccurate and misleading] information which is relayed via the web, the minister said, we have to tap into the potential satellite channels and the virtual world. He said we need to put these tools to good use. “Why shouldn’t we upload videos on [video-sharing website such as] YouTube?” he wondered.

If we align ourselves with people, we can better control public opinion, Jannati said, adding we can get nothing through opposing [people’s individual views, attitudes and beliefs which form] public opinion.

At the current situation, we need to develop appropriate software for cell phone systems in order not to let others sway public opinion, Jannati said, adding we need to take measures to address public opinion, both at home and abroad.

Iran’s revolution has a cultural nature, he said, adding we want to export our way of thinking and culture [to other nations].

The minister also said that we should exploit all potential to spread public diplomacy the world over. If so, we can influence public opinion in other nations too, he concluded.