Aggression on Syria has roots in resistance to Israeli occupation 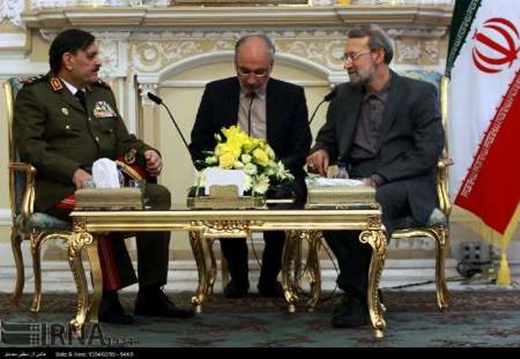 Speaker Ali Larijani has said that the Syrian people and officials have shown brave resistance to domestic and foreign terrorists over the past four years.

Parliament Speaker Ali Larijani said on Wednesday that the enemies’ aggression on Syria has roots in the resistance of the Syrian nation to the Israeli occupation.

Larijani made the remark in a meeting with visiting Syrian Defense Minister Fahd Jassem al-Freij.

Since Syria has been located in the front line of resistance to the Israeli occupation in the region, the country is under savage aggression by the ill-wishers as well as regional and trans-regional enemies.

As for the developments in Syria, he said that the Syrian people and officials have shown a very brave resistance against domestic and foreign terrorists over the past four years.

He expressed hope that we can witness the eradication of all terrorist groups in Syria through brave resistance of people and the country’s officials.

The destructive activities of terrorist groups do not limit to some countries but in case of ignorance of the regional governments, they will threaten stability and tranquility of all parts in the world, Larijani said.

Ties between Iran and Syria are very friendly, he said, adding that cultural and religious affinities have brought the two nations much closer.

The Syrian defense minister said, for his part, that the aggression of terrorists on Syria is a plot masterminded by the US and Zionists.

The Syrian official also briefed Larijani on the latest developments in fight against the terrorists in Syria and said that the Islamic Republic of Iran has always backed the Syrian people in hard times, offered humanitarian assistance and honored its ethical responsibility.

The Syrian army has attained significant achievements in the fight against the terrorists and is to implement new plans to this end, said the Syrian minister.