Adversaries are still at odds; A missile for a missile 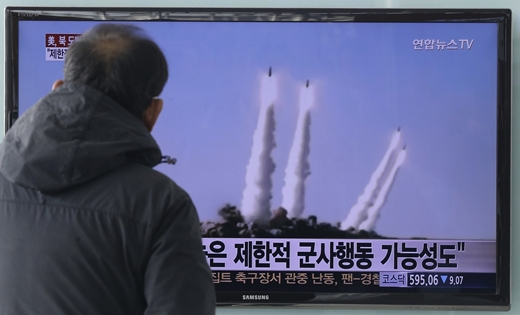 The US has found North Korea’s missile capability as an impediment to its deployment of a THAAD missile defense system on the Korean Peninsula, reads the analytical report.

The United States, which has over the past few months launched efforts to deploy the Terminal High Altitude Area Defense (THAAD)* system on the Korean Peninsula, has found North Korea’s high missile capability as a major obstacle to implementing its policies in the region.

The Islamic Republic News Agency (IRNA) on May 30 ran an analytical report on the THAAD system and whether the US missile option can provide a protective shield against imminent threats in the region. The following is the translation of excerpts of the report:

Washington, whose interventionist policies on the Korean Peninsula has come in the form of massive deployment of military hardware and personnel, has created the THAAD missile defense scenario to instill [into public opinion] the feeling that deployment of the missile defense system is essential, under any circumstances, to countering nuclear and missile attacks from North Korea.

The dominant, pervasive presence of the US on the Korean Peninsula, Washington’s reactions to North Korea’s policies and its off and on measures to provoke the North’s neighbors are all indicative of the fact that the US is trying to keep the flames of tension raging on the Korean Peninsula so that it can achieve its regional objectives.

The THAAD system is the latest US effort to achieve its goals in East Asia. Washington’s insistence on deployment of the defense system has caused the drum of tension between North Korea and its neighbors, especially South Korea, to be beaten still louder by the day.

Pyongyang, however, has always announced that it will strongly confront any threat by the US and its allies. This comes as US Secretary of State John Kerry made inflammatory remarks in Seoul earlier this month, saying that the United States continues to seek the deployment of highly effective missile defenses in South Korea.

Although South Korea – fearing exacerbation of tension with its northern neighbor – quickly downplayed Kerry’s remarks, the possible deployment has raised concerns in China and Russia. From the start, the Chinese have announced that nobody should reignite tension in the region. […]

When it comes to South Korea, they are not willing to see the US deployment of the missile system and have time and again protested against Washington’s military policies. […]

At issue is also North Korea’s possession of 1,000 medium-range Nodong and short-range Scud missiles which can neutralize the US missile system. Thanks to North Korea’s high missile capability, experts say, the deployment of THAAD will fail to dent Pyongyang’s power, adding that the country can tap into the potential of more than 1,000 missiles it possesses to easily counter any US missile move in the region.

The Global Times, a Chinese daily, has reported that the cost of one THAAD battery ranges from $1.5 billion to $2.5 billion, saying the US is trying in vain to deploy the system in South Korea. Moreover, THAAD cannot react speedily enough to intercept North Korean missiles which can land on South Korean soil three minutes after launch.

China has warned that the deployment of THAAD does not ensure security, saying it will cause North Korea to speedily bolster its missile capability at its border with the South.

Peter C. Espina, a Political Science professor at Seoul-based Yonsei University, says that THAAD poses a threat to China’s national security and that the Chinese will not by any means come to terms with the defense system, especially after Beijing’s recent verbal dispute with the US about the South China Sea.

Experts believe that US insistence on deploying the defense system on South Korean soil will spark off an arms race in the region and fuel inter-Korean tensions. The two Koreas are technically at war which each other since the 1953 war, because no peace treaty has been signed by the two neighbors.

THAAD is an anti-ballistic missile system manufactured by Lockheed Martin [an American global aerospace, defense, security and advanced technology company with worldwide interests] with a radar range of 1,000 km and an operational range of 200 km. It can travel at a speed of 10,080 km per hour.