An acid attack by a doctor on a doctor 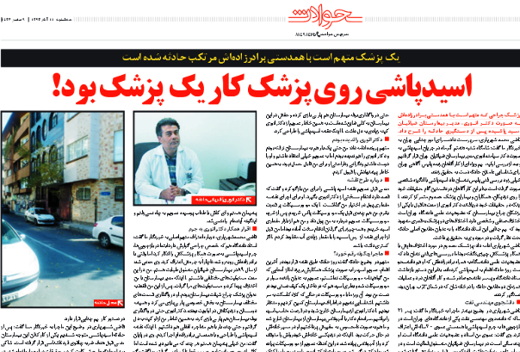 A look into an acid attack in the capital during which a physician used acid to vent his pent-up anger at a colleague.

Javan newspaper on December 2 featured a detailed report on a recent acid attack in the capital in which a physician was targeted. The news that Siamand Anvari, the head of Ziaeian hospital in Tehran, was attacked with acid – the latest incident in a string of attacks in the country in less thanthree months – was followed by reports that two suspects, one of them a surgeon, have been arrested in connection with the November 29 attack. The following is a partial translation of the report:

Mohammad Shahriari, a Tehran Court judge, said that a special team of police from the Criminal Investigation Department launched a probe into the attack after news broke that Dr. Anvari was attacked late Saturday on his way home.

After the team found out that the attack was personal motivated, police zeroed in on Anvari’s relatives, colleagues and patients and learned that Dr. Anvari had been for long at odds with a surgeon in the hospital over personal and professional questions. The surgeon – a faculty member at the University of Tehran – came on police radar as the prime suspect.

Police investigations also revealed that the suspect’s nephew, an oil engineering student in Tehran, was an accomplice in the acid attack. Then the police arrested the two suspects during two separate operations.

The 21-year-old nephew admitted during the interrogation that he aided and abetted his 40-year-old uncle in the attack, saying that his uncle who was relieved of his posts in the hospital a while ago had complaints about Dr. Anvari. “My uncle nursed old grudges against Anvari and that’s why he devised a plan to launch an acid attack.”

The accused further said that he had never been to the hospital, nor had he seen Anvari before, but he accepted the plot because, as he put it, he could not see his uncle suffer. He went on to say that his uncle said he wanted to take revenge.

The partner in crime was given money by his uncle to buy a motorbike and some acid. Fearing the acid might cause too much bodily harm, he said he diluted it with water before carrying out the attack.

He further said that he personally carried out the attack despite what was decided before. “I don’t have a driver’s license, so my uncle rode the bike.

“That day we waited on the bike in ambush near the hospital, having safety helmets on in order not to be identified. The subject left the hospital in an ambulance and we shadowed him. Dr. Anvari got off the ambulance somewhere near his home where my uncle got physically involved with him. He knocked Dr. Anvari down, asking me to throw the acid at his face.

“I opened the container and threw the content at Anvari. Then we escaped the scene as he was crying. […] We did what we did according to plan. Everything we did was calculated and we never thought that we would be captured.”

He showed remorse saying he wished he had not helped his uncle only to ruin his own future.

The uncle, a digestive surgeon, first denied any wrongdoing when grilled but came forward after he encountered his nephew, explaining his grievances about Dr. Anvari’s performance, particularly the delegation of his responsibilities at the hospital.

“I harbored grudges against him, so I plotted the attack and carried it out in collaboration with my nephew. He trampled upon my rights, and practiced cronyism in the hospital […]”

The surgeon remorsefully said he knew it was too late, but he wished he hadn’t made the stupid decision.

The investigative police have been ordered to continue the probe.

It was not the first incident at ZiaeianHospital. Police are still investigating a knife attack on a hospital staffer several months ago.