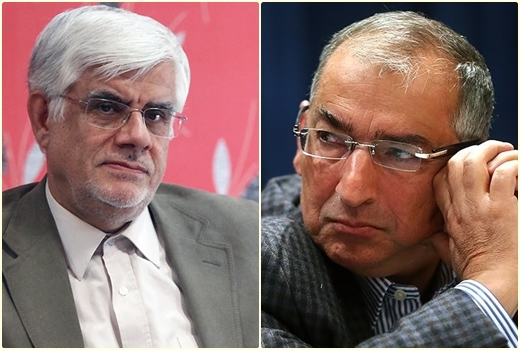 Sadegh Zibakalam, a well-known professor of political sciences at the University of Tehran, wrote an open letter to Mohammad Reza Aref, the leading reformist figure in the next Iranian parliament, and reminded him of a responsibility which he believes is more important than the parliamentary presidency.

Here’s IFP’s translation of excerpts from his letter, as published by Shargh newspaper.

Shargh: These days, the selection of next Parliament Speaker is one of the main topics in Iran’s political atmosphere. Aref, as the head of the reformists’ list [List of Hope] in the February 26 elections, and the chief of the High Council for Reformists’ Policy-Making, has received the highest number of votes among all MPs-elect, and now sees himself as the chairman of the Hope Faction [composed of reformist and moderate lawmakers] in the next parliament.

Certain reformist parties and figures consider him a great choice for the parliamentary presidency, and regard it as a change desired by people who voted for the left-wingers. On the other hand, some people prefer a more collaborative approach, as the next parliament will be divided between moderate conservatives, reformists, and pro-government figures.

In an open letter to Aref, Sadegh Zibakalam gives him some advice on the imminent competition for the role of Parliament Speaker.

He first offered his congratulations to Aref on the reformist success in the February 26 polls, “in spite of all obstacles,” and also on the formation of the “Hope Faction”, which is going to be headed by the senior reformist figure.

“We know that our unexpected victory in the elections was more surprising to us than it was to the conservatives. Millions of our compatriots accepted the invitation of reformist leaders and eagerly went to the ballot boxes on February 26 [first round] and April 29 [run-off] across the country, and as a result, expect that reformists take over the parliamentary presidency after 12 years of conservative leadership,” Zibakalam said in his letter.

According to Zibakalam, if a reformist figure isn’t elected as the Parliament Speaker, many of those who voted for the List of Hope, particularly the younger generation, would be disappointed, asking, “What was the point of taking part in the elections if no change was going to happen, and the legislature was going to remain in the hands of conservatives anyway?.”

“However, others have different considerations and concerns; while confirming these [aforementioned] arguments, they are worried that the reformists’ efforts to take the presidency of the Parliament would lead to an outright confrontation with the conservatives, and at the same time break an unwritten but fragile coalition of moderate conservatives with pro-government and reformist MPs,” he added.

“There is no doubt that both sides want the best for reformism. If many of these friends insist that you [Aref] should run for parliament presidency, they are concerned about our social support base weakening. On the other hand, if certain other friends do not pursue the same approach, that is because they are worried that your presidency in Parliament would provoke the other side’s [Conservatives’] anger, hindering the progress of reformism in Iran.”

Zibakalam further suggested that all reformists should wait for their leader, ex-President Seyyed Mohammad Khatami, and consider his opinion.

“From this point on, we should all abide by the reformist leader’s opinion; we should fully obey any decision made [by him]. We shouldn’t forget that you [Aref] didn’t want to withdraw from 2013 presidential elections in support of Rouhani. You might even have received more votes than Rouhani and today, you might have been the President instead of him, but you submitted to the reformist leader’s opinion, and paved the way for the victory of Hassan Rouhani by your historic decision,” he added.

Zibakalam further highlighted the important role the reformists’ faction, or Faction of Hope, is supposed to play in the 10th Parliament.

“Whether you are selected as the speaker of parliament or not, one thing is certain for now; a new faction has been formed in the tenth Parliament. Whether we call it the ‘Faction of Hope’ or the faction of reformists, it is a result of people’s votes for reformism […]. Although their first expectation is a change in the presidency of Parliament, such an expectation is more of a symbolic type, Mr. Aref. A more serious expectation they have is to see that the reformist MPs are really trying to realize and secure democracy, civil rights, civil freedoms, the rule of law, the improvement of economic conditions, and most importantly, to restore the Parliament to its real position, which is ‘in charge of all affairs’.”

Zibakalam outlined a long list of Iran’s domestic and international economic, political, and social problems, including unemployment, economic corruption, regional tensions, and social ills, stressing the important role of the Parliament under such circumstances.

“The government, as the executive body, is not able to settle all these problems alone,” he noted, reminding Aref and the reformist MPs of their huge responsibility in the new era.

“One of the adverse consequences of more than one decade of conservative domination over Parliament was the decline of its position in the country’s macro-management. As a result of conservatives’ presidency in three terms [7th, 8th, and 9th parliaments], the Majlis [Parliament] has practically been downgraded to a weak body, while it is supposed to be in charge of everything.”

He further referred to various cases in which previous parliaments had performed poorly, and criticized parliamentarians’ huge support for ex-President Mahmoud Ahmadinejad and his plans.

Zibakalam also questioned the inaction of the then parliaments in dealing with his “incorrect” policies, particularly his economic plans and foreign policy.

He finally concluded his remarks by urging Aref to restore the lost position of the Majlis, bringing it back to “being in charge of the country’s affairs”. Zibakalam described it as Aref’s first and most important duty as the leader of reformist MPs, and highlighted the role of Faction of Hope in this regard.

The faction can empower Parliament, as its members can join different commissions, including the Principle 90 Commission, where they can hold accountable the country’s most powerful bodies, including judicial, security, and even military and disciplinary ones, for their decisions and policies, he added.

“The voters expect that the Faction of Hope will be able to restore Parliament to its position, which is in charge of everything.  The reformist MPs should be able to realize the 100-year-old dream of ‘obeying the law’ in Iran, and this is more important than the presidency of Parliament and the share of each political faction.”

“The reformist MPs can work to revise the elections law, and to attract the attention of all Iranian bodies to the fact that, firstly, they should work within the framework of their legal authority, and more importantly, they have to be held accountable for their decisions and policies,” he noted.