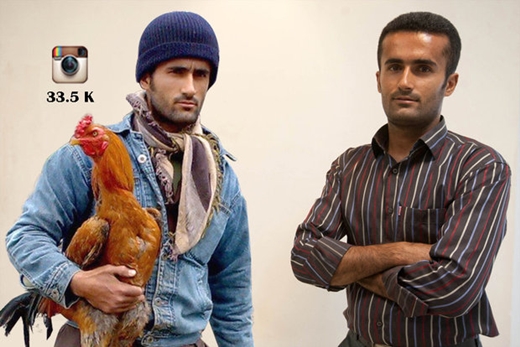 A young shepherd with thousands of Instagram followers says that he prefers to eat the fruits of his labor rather than living on his fame.

The photos an ordinary shepherd has posted online have earned him fame and a large number of followers on Instagram.

The unique pictures a young shepherd living in the north of Iran has posted on Instagram have several thousand followers. At a time when people use their cell phones to connect with others through social networking sites, get likes for what they post and see more followers visit their pages, a young shepherd takes photos from what is going on in his far-off village and shares them with fellow Instagram users.

Mehr News Agency on July 29 published a report on Mohammad Ghasem Torabi, a young farmer and shepherd in Bandar Gaz in Golestan Province. The man of our story is also known as Salar Poulad [his Instagram page is named after his two dead husky farm dogs Salar (Master in Persian), and Poulad (Steel in Persian)]. His simple narratives of the rustic life have turned out to be popular with city-dwellers. His followers outnumber the population of his home village by several times.

It all started when Mohammad’s brother bought him an Android smartphone and installed Instagram on it two years ago, telling him he could share the pictures he took of the farmland with people in other places. Mohammad did what his brother said and now his followers get online each day to see Mohammad’s new posts and take a breath of fresh rural air, albeit virtually.

Mohammad says he sees nothing good in urban life, wondering why his fellow villagers prefer to leave the serene life of the village for a [hectic] city life. He says the young people in the village are active in the virtual world, praising Mohammad’s photographic skills. He is also good at writing, although he is not well-read. Any interest in a media position in the city instead of shepherdry in the village? He rejects it outright.

Getting along with fame

Mohammad was first introduced in overseas-based Farsi-speaking TV channels, with many foreign media magazines dedicating a report to this young man who now has around 33,000 followers. He has no greed for fame and fortune, which is why he does not accept to use his claim to fame to make money. Mohammad says he prefers to achieve what he achieves through hard work.

Mohammad and his fellow villagers do not welcome change to their traditions and culture; that’s why they don’t sell land to the strangers. They frown upon the idea of tourists coming to visit their beautiful village, arguing tourists will bring cultural changes, but villagers don’t bear any cultural gap. Serenity is all a village is credited for.

Mohammad works from dawn to dusk doing the farm’s chores, among them milking the cows and attending to the plants in the garden. He says he spends at most half an hour on Instagram to post the pictures he’s taken during the day and read comments. He has no Internet access at home. His house sits between his brother’s and cousin’s which have wifi connection, so he gets online thanks to their Internet access.

Mohammad leads a simple life in his own world. Like other people, he has some problems at his work in the village, but still does not want to rush for the city. He says he will never want to out-migrate and promises to remain as rural as ever, and what he says is a gentleman’s agreement.