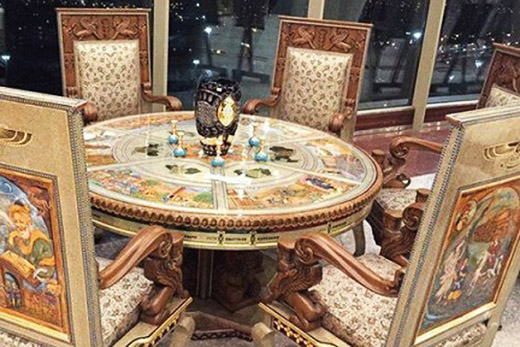 An Iranian artist has put on show a dining table at Tehran’s Milad Tower which is priced at $700,000. The table has paintings which feature different periods of Iran’s history.

Magnificent works of art have been put on show at Tehran’s Milad Tower, among them a stately wooden table with a price tag of more than $700,000.

Poolnews.ir on September 29 published a report on the expensive table which is on show at Milad Tower and remarks by Mostafa Khoushabi, the head of an artisan cooperative. The following is the translation of part of that report:

A group of 86 artists have displayed 2,600 works – fine pieces of craftsmanship – at the capital’s tallest tower. A six-person dining table stands out among the craftworks there. Master Rasoul Motamedi, a student of Mahmoud Farshchian [the master of Persian painting and miniatures], has done the painting on the table and a pricing committee at the Trade Promotion Organization of Iran has valued the magnificent table at $700,000.

This dining table features Iran’s history from the Median period to the Pahlavi era in six parts and displays the expanse of Iran’s territory in different historical periods. Each painting has a special background: another painting on the costumes of different historical periods. The artist has spent nine months to conduct research into the costumes of those periods.

Khoushabi rejected rumors that Master Motamedi has crafted the table following an order placed by an American, saying this is a unique piece of art which will be put on show in Munich. He stressed that nobody has placed an order for this table.

He further said that Master Motamedi had earlier exhibited a set of furniture at Milad Tower which was worth over $150 million. The committee in charge of pricing the artifacts has priced the furniture: three dollars for each square centimeter of the work.