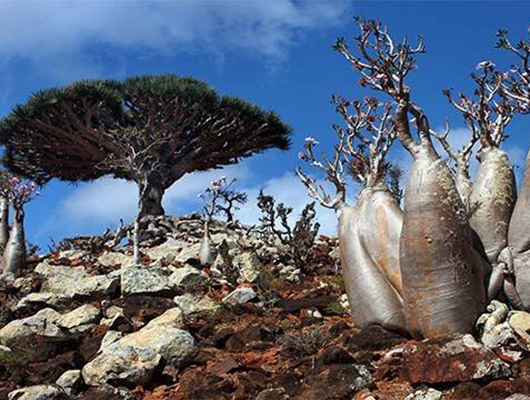 Although Yemen has been gripped by war, bombing, and bloodshed for the past one year and a half, the country is replete with secrets and wonders that are not known to many.

Here is IFP’s translation of a report by IRNA about the 9 amazing features of the people of Yemen. The features, which are said to have surprised even the Arabs, are cited from the UAE-based Akhbar al-Sa’ah.

Wonder 1: Many historians believe that origin of the Arabs is traced back to Yemen and their ancestors used to live in this country some 2,500 years ago.

Wonder 2: The history of Yemen’s Socotra Island merits attention because of the history of trade of such valuable goods  as incenses in this region; add to this the beautiful scenery and trees of Dracaena cinnabari which are practically non-existent in other parts of the worlds. Dracaena cinnabari tree or dragon blood tree is a dragon tree native to the Socotra archipelago part of Yemen in the Arabian Sea. The tree gets its name from the red sap that oozes out of its trunk.

Wonder 3: The name of this country, Yemen, was mentioned twice in the Muslims’ holy book of Quran in the Surahs Saba and Al-Ahqa.

Wonder 4: Over 80% of Yemenis live in highlands and soaring mountains.

Wonder 5: Yemenis are known for carrying around daggers at their waists. The dagger, which is called “al-Janbieh” among the Arabs, is of best quality. Building daggers is prevalent and popular in this country, and holding a dagger at the waist used to be a symbol of masculinity.

Wonder 6: Wedding ceremonies of Yemeni type are as long as 21 days where the participants perform a traditional dance called “Bara’a” in which the dancers hold daggers and weapons in their hands. It is also a kind of military training for them.

Wonder 7: The district of al-Makha in the city of Ta’iz, which is located on the shores of the Red Sea, has been one of the centres of coffee production in the world since the 15th century.

Wonder 8: According to some narratives, the name of Africa was originally used for Yemen.

Wonder 9: Based on Islamic and Arabic historical narratives, Yemenis are the first people who traditionally set a precedent for shaking hands.

Saudi Arabia, as one of the richest countries in the region and a US-backed state, formed a coalition with 9 other Arab countries and waged a devastating war against the most impoverished Arab country in the region, Yemen.

Hundreds of thousands of people, including women and children, have been killed, injured and displaced since the beginning of the war in March 2015.

During the past 17 months of war the resistant people of this country have been under the unfair siege of Saudis coalition and according to international human rights organizations their abject condition of life has aggravated into human crisis.