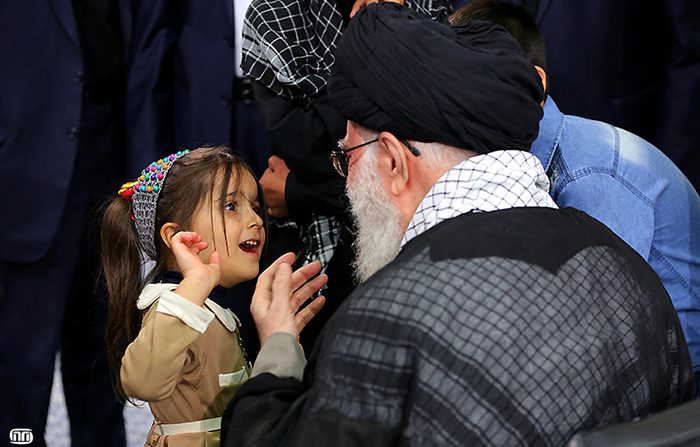 Leader of the Islamic Revolution Ayatollah Seyyed Ali Khamenei recently met the families of Iranians killed in the fight against terrorism in Syria and Iraq. The little daughter of one of these martyrs had a funny conversation with the Leader, which is reported by Daneshju and translated by IFP.

Mahdi Qazikhani was a 30-year-old man with three children. He was killed by Takfiri terrorists on December 7, 2015, in Aleppo, Syria. Nahal, his only daughter, is four years old. Her mother relates a funny conversation she had with Ayatollah Khamenei.

“One day, they called and said we are invited to the Leader’s Iftar ceremony [a meal served for Muslims to break their fasting]. I was very happy about the invitation, and dressed up my children. Like a very important ceremony, I bought new clothes and shoes for myself and my children so as to be well-dressed in our meeting with the Leader. We – my first son, the 7-year-old Mohammad Matin, and I – were both impatient for the meeting,” Qazikhani’s wife, Fatemeh Bagheri, said. 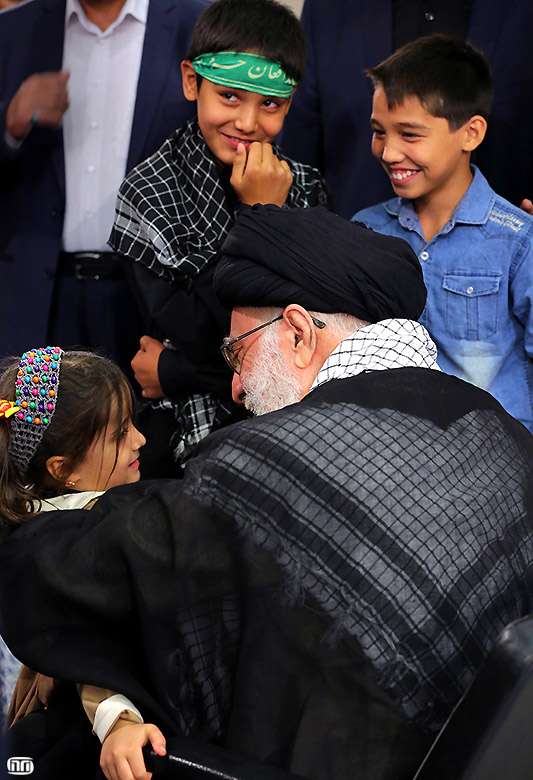 “That day in the meeting, I was so much impressed by the Leader’s charisma that I was just crying. Meeting him personally was very different from watching the Leader on TV. I couldn’t control Nahal anymore. I was worried that she would get lost, but my friends told me no one can get out of the Leader’s house. Then I was relieved.”

“I delivered the letter I had written to the Leader, and my only request was that Ayatollah Khamenei prays for my children.”

“I forgot to check Nahal for a couple of minutes, and I didn’t know where she has gone. I was confident that she couldn’t leave the place, so I didn’t look after her. Mohammad Matin was also in men’s section alone. I told myself I’d better leave them alone so that they could have good memories of the meeting.”

“After a while, Nahal came back.

“I thought she had met one of the senior men, and been busy playing and talking to him. I didn’t know she meant the Leader.

“At the moment, I laughed at Nahal’s words, and didn’t even imagine that she had said such things to the Leader. When we returned home, my friends called me and said Nahal’s photos are published in the Internet. In the photos, she is talking to the Leader and he is laughing. There I realized the ‘pink hat’ story was the details of her conversation with the Leader. I showed her the Leader’s photo, and asked her if she had requested the same man to buy her a pink hat. She confirmed and once again told me the story.

“I was extremely happy. I kissed Nahal and was glad she had such an opportunity,” Bagheri noted.