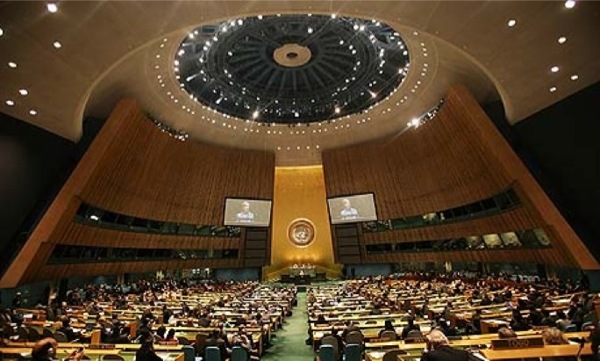 Foreign Minister Mohammad Javad Zarif has met with his Egyptian and Algerian counterparts in New York to discuss a Middle East free from nuclear weapons.

Iranian and Egyptian foreign ministers in a meeting in New York discussed the plan for the nuclear-free Middle East region.

Mohammad Javad Zarif and Sameh Shoukry held the meeting on the sidelines of the NPT Review Conference in New York Monday.

In this meeting, the two sides underlined the need for closer cooperation between the Iranian and Egyptian delegations in the ongoing NPT conference for adopting close and unified positions.

The two foreign ministers also discussed the plan for the nuclear-free Middle East region as well as the NPT Review Conference.

Iran’s foreign minister also met with his Algerian counterpart Ramtane Lamamra on the sidelines of the NPT Review Conference.

During the meeting, the two foreign ministers exchanged views on the latest crises in Yemen and Syria. The two sides also emphasized the importance of finding a peaceful solution to the current crises in the two countries.

The Iranian and Algerian foreign ministers also discussed the NPT Review Conference and called for coordinated positions of the two countries, especially on a Middle East free from nuclear weapons.

Zarif is in New York to attend the Review Conference of NPT which is held at five-year intervals at UN Headquarters to discuss the three major parts of the treaty and reach a final binding document.