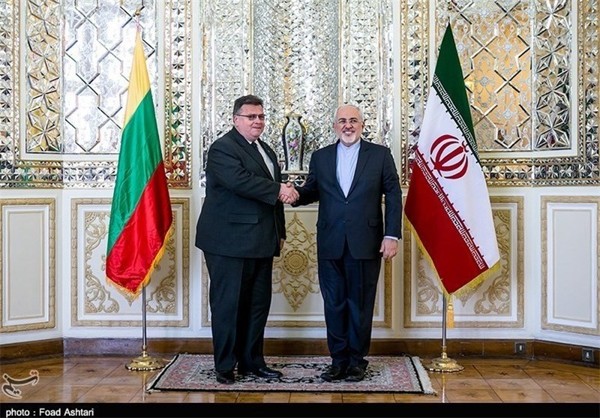 Speaking in a Saturday May 28 meeting with Lithuanian Foreign Minister Linas Linkevicius in Tehran, Zarif highlighted the banking problems hampering the progress of Iran’s economic ties with foreign countries after the nuclear deal with the Group 5+1 (Russia, China, the US, Britain, France and Germany), known as the Joint Comprehensive Plan of Action (JCPOA).

“We expect the European sides to take tangible and concrete steps toward facilitating (Iran’s) banking ties, so that we will be able to see its results in the country’s economy,” he said.

During the meeting, the Iranian and Lithuanian top diplomats also exchanged views about the latest efforts to promote relations between the two countries in various areas, economics in particular.

While the Joint Comprehensive Plan of Action (JCPOA), a 159-page nuclear agreement between Iran and the Group 5+1 (Russia, China, the US, Britain, France and Germany) came into force in January, some Iranian officials have complained about the US failure to fully implement the accord.