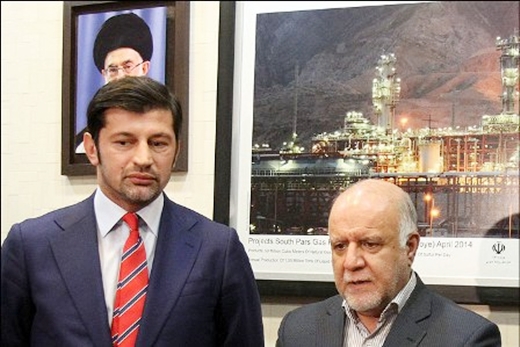 Minister of Petroleum Bijan Zangeneh said on Tuesday that export of gas to Georgia and joint investment in the petrochemical sector will be pivot of the Iran-Georgia cooperation.

Speaking to reporters after a meeting with Georgian Energy Minister Kakha Kaladze on Tuesday, Zangeneh said export of Iran’s gas to Georgia was discussed in the meeting as the Caucasian nation needs gas and there is possibility of joint investment in petrochemical sector.
He said that in light of joint investment in the petrochemical sector of Georgia, Iran will supply its feedstock and invest along with Georgian companies in the sector.
He referred to Georgia’s advantage for export of goods to European Union and said the issue will absolutely be conveyed to Iranian private sector for investment.
He added that studies should be conducted in the field and ‘we hope it will be successful and investment will be made.’
He also said the two countries will introduce to each other their companies for cooperation.
The Georgian minister said details of gas exports from Iran to his country will be investigated. ‘We hope bilateral ties will expand in the post-sanctions era.’
He noted that prospects of cooperation is clear regarding extensive historical relations.
On gas imports from Iran, Kaladze said talks on volume and price of gas will continue and meetings will be held to this end.
He suggested two options for export of gas from Iran to Georgia: Firstly through Azerbaijan and secondly through Armenia.
‘Further details on gas exports of Iran to Georgia will be mulled in the upcoming sessions,’ he added.