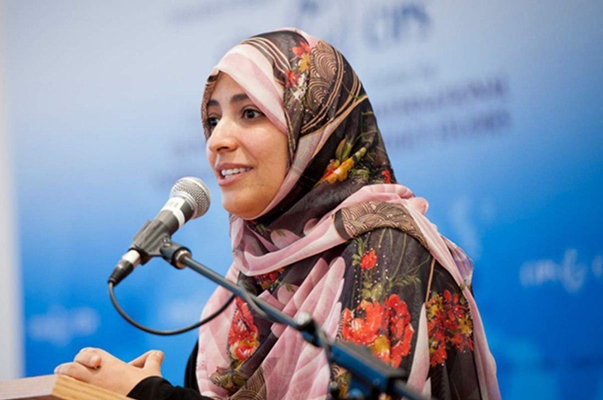 A Yemeni Nobel peace prize winner says she was fascinated by the friendly behaviour of Iranian Foreign Minister Mohammad Javad Zarif after she criticized the country for its role in their encounter, noting that it shows a big difference in thinking between Iranians and Saudis.

Tawakkol Karman, a female journalist supporting Yemen’s 2011 revolution who delivered a speech at the conference Sunday, said in a Facebook post this week that she was amazed by Zarif’s reactions after she strongly criticized Iran.

“While talking about destructive foreign interventions in Yemen, I seriously assailed Iran and its negative role in the region, but Mr Zarif who was sitting beside me said ‘we honour you’,” she wrote in a Facebook post this week.

“I mentioned this so you understand the big difference between the thinking and behaviour of Iranians with some Arabs including Saudi Arabia and the UAE,” he said.

This is while Karman has been attacked by Saudi and Emirati users of social media for her comment criticizing the two Arab countries for their invasion of Yemen, which has killed and injured thousands of Yemenis and put the nation on the verge of famine.

Karman, the chairwoman of Women Journalists Without Chains, is a member of Yemen’s al-Islah party, which is close to Muslim Brotherhood.

Karman has repeatedly called for peace talks with Ansarullah and the withdrawal of Saudi forces from this country.