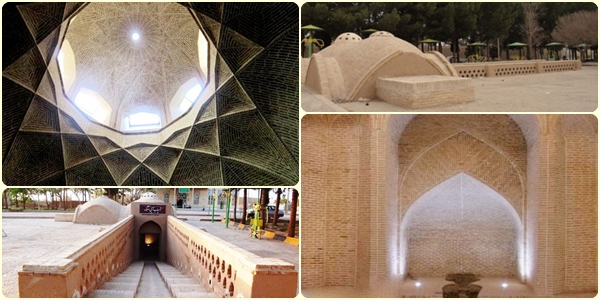 It is the oldest in Yazd Province and the largest in the country, said Mohammad-Mehdi Sherafat according to Iran Daily.

Water mills are among the historical sites of Yazd Province. They were established near villages and along the aqueducts, Sherafat added.

Ashkezar Water Mill, which dates back to the Ilkhanid era, reaches a depth of seven meters, he said.

Located 20 km from the provincial capital Yazd, it was renovated by Yazd Cultural Heritage Department, and is ready to receive visitors, he said.

The brick water mill is one of the 18 water mills in the province registered on the National Heritage List, he said.

Yazd is one of the most well-known desert cities of Iran.

Many Iranians and foreign tourists are interested in visiting Yazd to see the architecture which is typical of desert areas.

It is known as the city of wind-towers, Zoroastrians, ‘termeh’ (traditional brocade), silk weaving and sweets (such as ‘baqlava’ and ‘qotab’).

A trip to Yazd will make one familiar with life in desert towns and how people adjust to it. You learn about ‘qanat’ (underground water supply system) for which Iranians are well-known.

The water reservoirs, icehouses, wind-towers and pigeon towers make it worthwhile to visit Yazd, as tourists explore the uniqueness of this ancient city.

Yazd, located 270 km southeast of Isfahan, has a population of approximately 560,000. It attracts a growing number of tourists each year.

The city is hot and dry in summer due to its location, which is between the two main deserts of Dasht-e Kavir and the Kavir-e Lut.