With or without sanctions, we’ll pursue resistance-based economy: VP 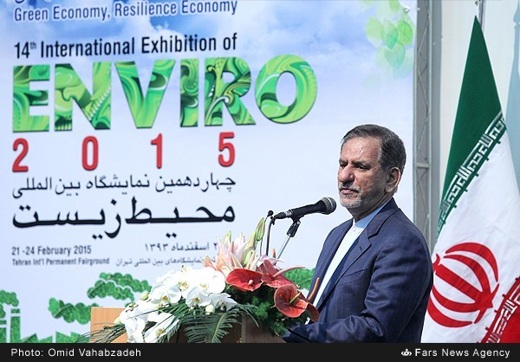 Eshagh Jahangiri described resistance-based economy as one which remains unfazed in the face of local and foreign shocks.

First Vice-President Eshagh Jahangiri has said resistance-based economy is a perfect recipe for simultaneous settlement of a variety of problems such as unemployment, inflation, sanctions as well as environmental woes.

According to a February 22 issue of Ettela’at daily, the vice president made the comment at a 14th International Environment Exhibition Sunday. The following is what else he and the environment chief had to say at the expo:

Everyone should contribute to efforts to fundamentally settle the environmental problems of the country. Taking political and factional advantage of the problems of the people is below officials. Those who resort to such practices should know that their impact is short-lived.

Air pollution affects as many as 30 million people across the nation and since the rise to power of the current government measures to settle the problem of air pollution have been a top priority.

Government is committed to environmental issues in its development programs. Without environmental studies no permission will be issued to development or industrial projects. Projects like the Gatvand Dam which affect the environment will be rectified.

Director of the Environment Protection Organization told the same gathering that sustainable development won’t be possible in the absence of efforts to protect the environment.

Experience shows that many of the harms the environment suffers are irreversible, so measures should be taken to secure development and protect the environment in parallel.