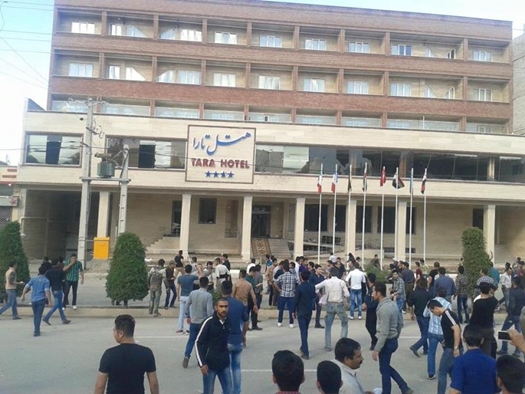 Police say they have arrested a suspect in the death of a young girl who threw herself out of a hotel window in Mahabad a few days ago [presumably escaping sexual assault].

Tara Hotel in Mahabad, a city in West Azerbaijan Province, was set on fire on Thursday after a group of people gathered outside to protest the mystery death – a day earlier – of a young girl and call on officials to follow up the case.

A police official announced Saturday that the suspect – a local man with no connection with security forces – has been arrested and admitted to his involvement in the death of the girl.

Entekhab, a news website, on May 8, released a report on what happened in Mahabad on Thursday followed by the remarks of local officials. [The report was filed before the suspect was taken to custody]. The following is the translation of excerpts of the report:

The ralliers called for the immediate punishment of the one who is involved in the death of the young girl. Reports say that the girl jumped off a hotel window on Wednesday following a suspected attempt at sexual abuse.

Mahabad’s governor Ja’afar Katani said protesters chanted slogans against the hotel manager, and the police – present at the scene – did not resort to violence, but the hotel was set on fire and was partly looted despite insistence by the victim’s family on the pursuit of the case through legal channels.

Alireza Dadfar, a security official in the province, told reporters the anti-revolution media are spreading lies about the hotel incident seeking to provoke the youth in the city.

He rejected allegations that a member of security forces has been implicated in the young girl’s death, saying the suspect was a private consultant who was present at the scene on a hotel upgrade mission.

Forensic medical examinations have also substantiated reports that the girl had not been subjected to sexual assault, the official said.

He said a group of people set the hotel on fire, injuring 25 people, including seven police.

Dadfar also rejected reports of clashes between police and people as well as images that have gone viral in cyberspace [of police violence], saying police tried to disperse the crowd through anti-rioting methods.

He said a number of people involved in the arson attack have been arrested, adding the police will show no more restraint if the youth zeal is taken the wrong way.