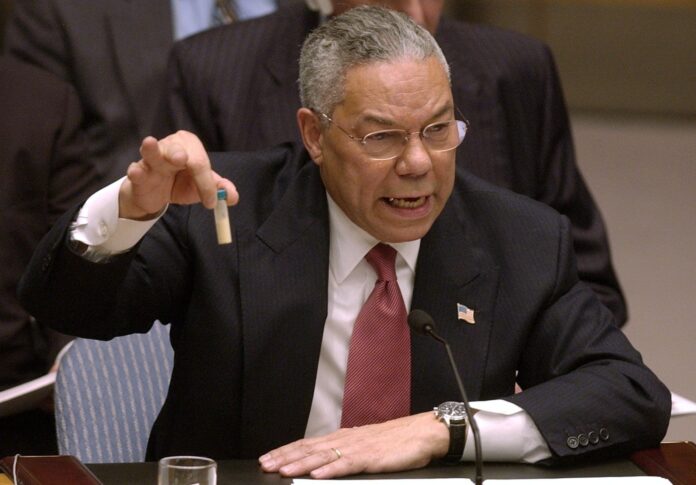 The death of former US Secretary of State Colin Powell has drawn outrage from social media users who call the late general a “war criminal”. The former Top diplomat had pushed faulty intelligence before the United Nations (UN) to advocate for the Washington-led invasion of Iraq in 2003.

The death of Powell has drawn an outpouring of sympathy and praise from politicians, but social media users made “war criminal” trend instead, having not forgiven the ex-secretary of state for his role in the 2003 invasion of Iraq.

Powell died on Monday of complications from Covid-19, according to his family. He was eulogized in major media outlets as the first black secretary of state and chairman of the Joint Chiefs of Staff. President Joe Biden stated Powell embodied “the highest ideals of both warrior and diplomat,” while 43rd president George W. Bush called him a “great public servant.”

Another image, however, dominated the social media reactions to his death: that of Powell holding up a vial of fake anthrax in the UN General Assembly in 2003, claiming that Iraq had weapons of mass destruction (WMD) and making the case for the US invasion that followed.

Others noted that Powell’s connection to US atrocities goes back to the Vietnam War.

Others, like the Intercept’s Ken Klippenstein, opted for sarcasm, calling Powell “a man of unparalleled integrity and courage” – as caption to the infamous UN photo.

When Congressman Jamaal Bowman (D-New York) praised Powell as an inspiration to himself as “a Black man just trying to figure out the world,” one socialist publication accused him of praising a war criminal.

Grayzone’s Max Blumenthal mocked MSNBC’s Joy Reid for saying Powell “had some tough moments around our wars, but was a fundamentally good and decent man and a great American we could all be proud of.”

The opprobrium over Powell seemed particularly in evidence on the political left.

Andray Domise, who describes himself as a “Marxist-Dessalinist,” said that not criticizing a black war criminal amounted to “benevolent racism,” and that atrocities don’t disappear “when it’s a Black person giving the green light.”

Noname Book Club, a “community dedicated to uplifting POC voices” with nearly 600,000 followers, criticized the treatment of Powell as “first black,” arguing that this was a feature of “white domination” that “reduces our desire for collective liberation and makes us hyper focus on white approval” and well as idolizes “the first black billionaire or war criminal.”
Born in New York of Jamaican parents, Powell was in Vietnam on two occasions – first as a captain, advising the South Vietnamese Army, and later as a major investigating the unit behind the My Lai massacre. He rose to the top of the US military hierarchy by the late 1980s, serving as chairman of the Joint Chiefs of Staff under President George H.W. Bush during the 1991 war against Iraq over Kuwait. He would return to the Middle East as the younger Bush’s secretary of state a decade later.

Powell retired from the State Department in January 2005, and was replaced by Condoleezza Rice.