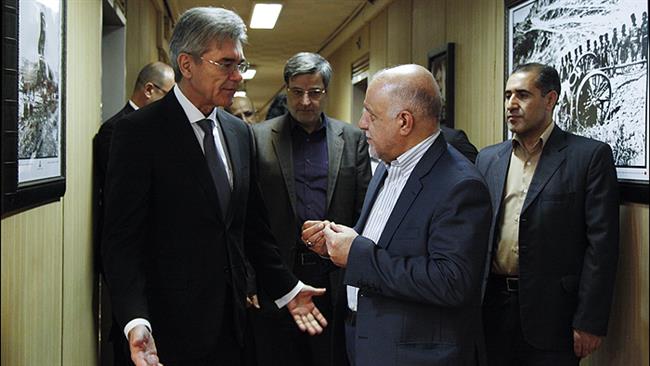 Iran’s Minister of Petroleum Bijan Zangeneh hopes to open a “new chapter” in cooperation with Siemens as Europe's biggest engineering conglomerate refreshes its indelible mark in the Iranian industry.

Once suspected of helping the US and Israelis sabotage Iran’s nuclear energy program, the trains-to-turbines German group is back to revive the lucrative business which it abandoned in the wake of Western sanctions on Tehran in 2012.

Siemens Chief Executive Joe Kaeser met Zangeneh in Tehran on Monday to work out details of an initial agreement which the company landed early last month to capitalize on trade with Iran.

The minister said Iran needed Siemens’s gas compressors and machinery to revive its ramped-up production bid which fizzled out after Western companies downed the tools under the sanctions regime.

Siemens blocked the delivery of gas turbines and compressors which Iran had bought to provision and service its oil and gas projects.

“The equipment was for South Pars phases, LNG (projects) and some of the Iranian refineries, the release of which has started after the annulment of sanctions,” Zangeneh said.

A Siemens official said earlier this month that “there are no legal restrictions anymore” for exports of machinery to Iran.

Siemens had been the main provider of gas turbines and compressors to Iran’s oil projects for decades, winning major contracts in the country.

In 2010, Siemens reportedly made over $967 million more than the previous year in Iran on the back of several contracts which included a $420 million deal to provide the country with 150 locomotives and also gas turbines and compressors.

Iranian officials later accused Siemens of providing sensitive information to US and Israelis about control systems it had acquired from the company, enabling them to damage Iran’s industry.

They said the US and Israelis had used the details provided by Siemens to produce the Stuxnet worm that specifically attacked Iranian centrifuges used for enriching uranium. Siemens denied the accusations.

On Monday, Zangeneh said Siemens can jointly produce equipment with Iranian companies for exports to regional countries, including Iraq, Central Asia and elsewhere.

“We hope a new chapter will open in cooperation between Iran and Siemens during the post-sanction (era),” he said, quoted by the Shana news agency.

“If you look at what Iran needs to rebuild its country, it almost looks like a description of business for Siemens,” Kaeser told Bloomberg then.

Germans’ footprints in major industrial projects in Iran date back to the late ninetieth century, including the Trans-Iranian Railway. The line is famous for being used by the Anglo-Soviet occupiers in 1940s to ship arms supplies during World War II.

Unlike Britain and the US, Germany has had no imperialist and cloak-and-dagger history in Iran and is generally viewed positively.

A number of Germany companies, including Volkswagen and Daimler, are jostling for position as Iran is opening to international business.