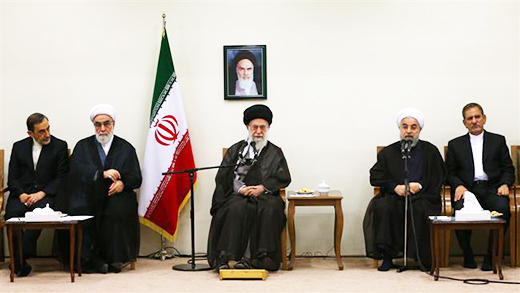 Since the beginning of the Revolution, the enmity of the Zionists and the Americans has not waned, the leader said.

Leader of the Islamic Revolution Ayatollah Seyyed Ali Khamenei says the enmity of the US and the Israeli regime toward Iran has never subsided.

“Since the beginning of the [1979] Revolution to this day, the enmity of the Zionists and the Americans has not waned; and this reality should never slip the minds of [Iranian] authorities,” Ayatollah Khamenei said in a meeting Wednesday with President Hassan Rouhani and his Cabinet.

Wednesday marks the third day of the National Government Week.

The Leader said concluding the nuclear negotiations was “one of the very important tasks” accomplished by the administration, adding, however, that the likelihood of neglecting the goals of enemies in the nuclear issue is a concern.

“Of course, methods of enmity and doing harm may change; however, all political, economic, and cultural officials must be vigilant not to [do anything] to play into the hands of the enemy under any circumstances. They should make sure their decisions do not willingly or unwillingly help implement the package envisaged by the enemies,” the Leader pointed out.

“If we abandon our vigilance, we will suddenly find the enemy infiltrate certain areas and being engaged in dangerous cultural, economic and political activities; therefore, we must be completely careful,” Ayatollah Khamenei said.

Before the Leader’s remarks, President Rouhani delivered a brief report on the performance of his administration during its two years in office.