US Double Standards towards “Inhumane” Sanctions 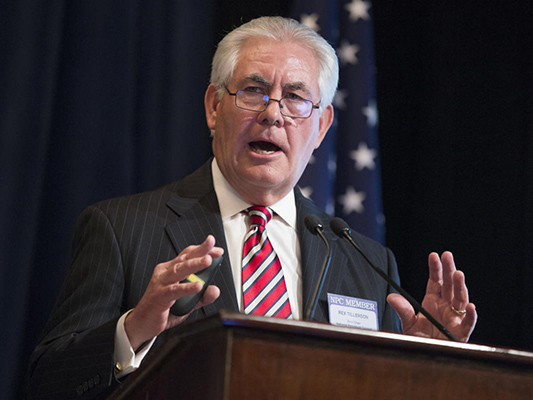 The US secretary of state has called “inhumane” the sanctions imposed on Qatar by a number of Arab states and expressed concerns over the impacts of the sanctions on trade ties between his country and Qatar. This comes as Washington continues to put considerable efforts into applying illegal sanctions on Iran.

Just two days after the US Senate advanced Iran Sanctions Bill, US Secretary of State Rex Tillerson said putting Qatar under blockade had led to “unintended” humanitarian consequences and called on Saudi Arabia, the United Arab Emirates, Bahrain and Egypt “to ease the blockade.”

“We’re seeing shortages of food. Families are being forcibly separated, and children pulled out of school…Our expectation is that these countries will immediately take steps to de-escalate the situation and put forth a good faith effort to resolve their grievances they have with each other,” the US top diplomat said.

The call for easing Qatar’s blockade comes as, despite the nuclear deal between Iran and the P5+1 group of countries, the US Senate unanimously approved a bill to tighten Iran sanctions on Wednesday. The sanctions not only have significantly hampered Iran’s international trade, but also created serious obstacles in the way of importing medicines, endangering the Iranian patients’ lives over the past decades.

Meanwhile, the US senior officials have repeatedly accused Iran of sponsoring terrorism with no solid evidence. In the latest case, US President Donald Trump called the Tehran twin attacks the fruits of Iran’s support for terrorism. The attacks, which left 17 dead and dozens injured, were claimed by the ISIS terrorist group.

Trump’s statements which sparked harsh international criticisms across the world stand in direct contradiction with his presidential campaign promises. During his campaign Trump repeatedly blamed his predecessor, President Barack Obama, for supporting Saudi Arabia. He also praised Iran and Russia for their fight against ISIS.

But Trump dramatically changed his positions since taking office and particularly after signing a $200b arms deal with Saudi Arabia. Now, he not only remains silent towards Saudi Arabia as the ideological hub of terrorism, but also accuses Iran of sponsoring terrorism.

It seems that the US expresses concerns about terrorism and accuses certain states of sponsoring terror based on its trade ties with the regional states. With its significant trade relations with Saudi Arabia, the US has already closed its eyes to Riyadh’s dictatorship, violent acts and sponsoring terrorist groups like Al-Qaeda that was behind 9/11 attacks.

Interestingly enough, Washington is against Qatar blockade despite admitting its support for terrorists in Iraq and Syria. During his Friday statements, Tillerson said: “The nation of Qatar unfortunately has historically been a funder of terrorism at a very high level.”

He went on saying: “The emir of Qatar has made progress in halting financial support and expelling terrorist elements from his country, but he must do more and he must do it more quickly.”