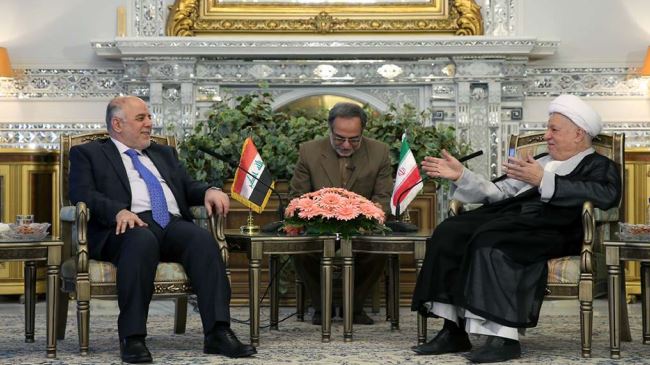 Chairman of Iran’s Expediency Council Ayatollah Akbar Hashemi Rafsanjani has underscored the need for unity among Islamic countries under current circumstances in the Islamic world.

In a meeting with Iraqi Prime Minister Haider al-Abadi in Tehran on Wednesday, Hashemi Rafsanjani said enemies of Islam always use “division and rifts” in order to achieve their own political goals, adding that “the capacities of Muslim countries should not be wasted on groundless rifts.”

Urging the Iraqi government to foster unity among Shias, Sunnis, Kurds, Turkmens and other Iraqi ethnicities, Rafsanjani said unity will prevent enemies from exploiting possible divisions to meet their own political ends.

He noted that “reaching a consensus is hard, but more difficult than that is for the country to be gripped by internal divisions.”

The Iraqi prime minister, for his part, said his country sees Iran as a “reliable neighbor,” expressing hope for the expansion of Tehran-Baghdad relations.

He also termed the ISIL terrorists as false advocates of Islam, adding that they call infidels those Iraqi Shias and Sunnis who do not submit to their views, adding that terrorists have “resorted to massacre under the pretext of sectarianism.”

Iraq has faced brutal violence by the ISIL across the country’s north and west since early June. The ISIL terrorists have threatened all communities, including Shias, Sunnis, Kurds, Christians and Izadi Kurds, during their advances in Iraq.