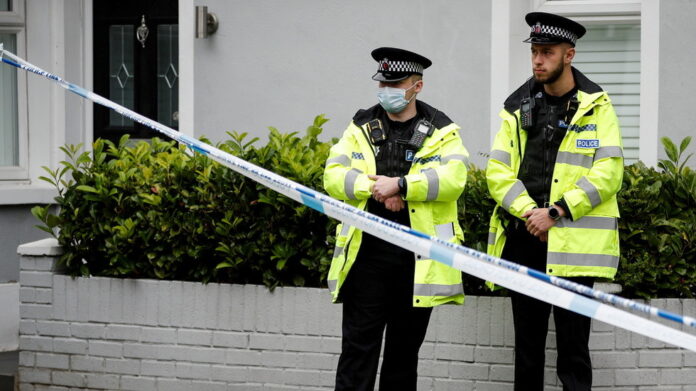 British lawmakers will be offered beefed-up security in their constituencies in the wake of the fatal stabbing to death of MP Sir David Amess. The measures could include a regular police presence at weekly surgeries.

MPs must not be “cowed” by the threat of violence in the wake of the murder of Sir David, home secretary Priti Patel has said.

Patel has ordered a police review of MPs’ security following the killing at a constituency surgery in Sir David’s Southend West seat, and is expected to address the House of Commons on Monday.

Speaking after laying a wreath at the scene of Friday’s tragedy in Leigh-on-Sea, Essex, Patel described Sir David as “a man of the people, killed doing a job that he loved, serving his constituents as an elected democratic member”.

Following Sir David’s death, there have been calls for an end to face-to-face surgery sessions at which MPs meet constituents to discuss their concerns and hear their opinions, usually on Fridays when they are free of parliamentary duties.

Conservative backbencher Tobias Ellwood has urged colleagues to call off in-person surgeries until the completion of the security review, while veteran MP Sir Bernard Jenkin said there was no justification in the age of online video conferences to continue a practice which is “frankly not really necessary”.

Patel would not be drawn on any security changes being planned, but said that MPs must not let violence of the kind seen on Friday “get in the way of our functioning democracy”.

“I’ve convened meetings yesterday, I’ve been with the Speaker of the House and with the police and our security services to make sure that all measures are being put in place for the security of MPs so that they can carry on with their duties as elected democratic members,” she stated.

“I think it’s important for all members of parliament… (that) we carry on doing our duties. We live in an open society, a democracy where we are accessible to the people. That is right and proper,” she added.

“We have measures in place to safeguard our MPs. There have been a lot of lessons that have been learned over recent years following the appalling murder of our former dear colleague Jo Cox. Those measures are always under review,” she continued.

“It’s important that that continues,” she stated.

Patel said it was “absolutely” possible to balance MPs’ security with the need for constituents to have access to their representatives.

“David was a dear friend of mine, a loyal friend and colleague and man of the people,” she said, adding, “He was killed serving his own constituents and constituency.”

“We will carry on, we live in an open society, a democracy. We cannot be cowed by any individual or any people with motives to stop us from functioning to serve our elected democracy. We have measures in place and we will continue to review and strengthen measures,” she underlined.

“We will continue to absolutely stand by the principles that we are elected by, to serve our constituents in the open way in which we have been doing, but also recognising that there are safety and protection measures that we have to undertake too,” she underscored.

Police forces have contacted all 650 MPs following Sir David’s death to offer reassurance and support, with some deploying officers to public events MPs were attending.