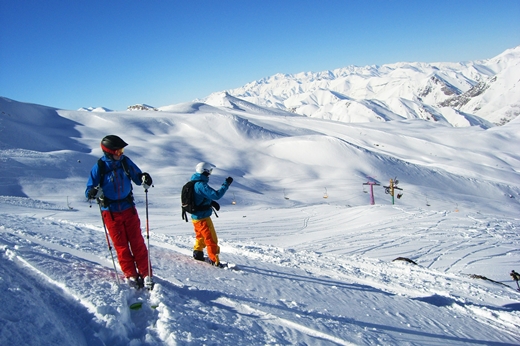 Mountain Heaven, a tour operator which specializes in Alpine chalet holidays in France and Switzerland, is branching out to launch escorted ski trips to Iran next winter.

Nick Williams, the managing director, will lead two eight-day tours to the resorts of Dizin, Shemshak and Darbandsar in the Alborz Mountains, which will also visit Tehran and Esfahan. The cost of £1,100 ($1,580) per person includes accommodation, guiding and some meals but not international flights or an Iranian visa.
Overnight snowfalls in excess of 50 centimetres are not uncommon at Iran’s two main resorts, in the Alborz Mountains north of Tehran. Shemshak is 2,550 metres high, and Dizin 2,650 metres, with slopes up to 3,500 meters, making it the highest resort in the country, with views of Iran’s tallest mountain, the 5,610-metre Damavand. Dizin’s high altitude means the resort can stay open until mid-May.
“All the bad press is simply not true … there are no scenes from Homeland,” Williams told British snowsports website Skipedia, referring to a controversial American television series. “Travelling as a group, organized by a bonded tour operator, will make it simpler for curious skiers to enjoy the skiing, Iranian culture, fantastic food and a very warm welcome!”
British travel agencies have been promoting Iran as an exotic destination since last July, when the landmark nuclear accord was signed between Tehran and the six major world powers (the US, Britain, China, Russia, France and Germany).
The UK Foreign and Commonwealth Office relaxed its travel warning for Iran a week after the signing of the deal, and Britain reopened its embassy in Tehran the following August. British Airways is resuming flights from Heathrow to Tehran this summer, with a six-time weekly service starting on July 14.