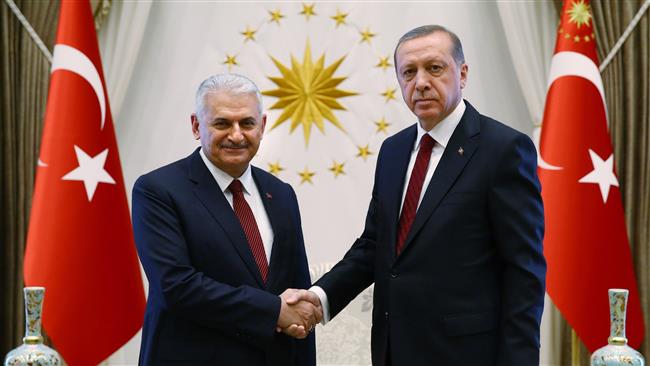 Prime Minister Binali Yildirim made the comparison during the opening of a new bridge over the Bosphorus Strait between Europe and Asia in Istanbul on Friday.

Erdogan has “made cars pass beneath sea” as Mehmet the Conqueror carried ships over land, Yildirim said.

He was referring to the Ottoman ruler’s carrying of ships overland to avoid capture during his seizure of Constantinople in 1453 and inauguration under Erdogan in 2013 of a metro line passing beneath the Bosphorus Strait.

Yildirim’s comments came during the opening ceremony of the third bridge over the strait between Europe and Asia in Istanbul, which follows the tradition of the first one built in 1973 and the second in 1988.

Addressing the event, Erdogan himself said, “We are connecting continents with the bridge,” adding, “People die but their work remain immortal.”

“To attain the level of a civilized nation is not possible with words but with actions,” said Erdogan, who has dominated Turkey from 2003-2014 as premier and from 2014 as president.

Upon conquering Constantinople, Mehmet called himself “Caesar” of the Roman Empire on the ground that the city served as the empire’s seat and capital.

The Turkish head of state has been blamed by critics for harboring empire-building ambitions similar to the ones nurtured by the rulers of the Ottoman Era.

The bridge is named after the 16th century Ottoman Sultan Selim I, who conquered swathes of the Middle East during his eight-year rule in 1500s.

The sultan realized much of his conquests in the region after he vanquished the empire’s opponents in modern-day Syria in 1516.

Turkey invaded Syria on Wednesday to purportedly target Takfiri terrorists and Kurdish fighters on the anniversary of the historic battle.

During the inauguration of the bridge, Erdogan said Turkey will continue its operations inside Syria until all terrorist groups are eliminated.

Earlier this year, Syrian President Bashar al-Assad said his Turkish counterpart represented the Ottomans who massacred Armenians a century ago.

He said the Turkish leader and his government were using the same tool as was used in the killing of Armenians against the Syrian people, referring to Ankara’s widely-reported support of militants.