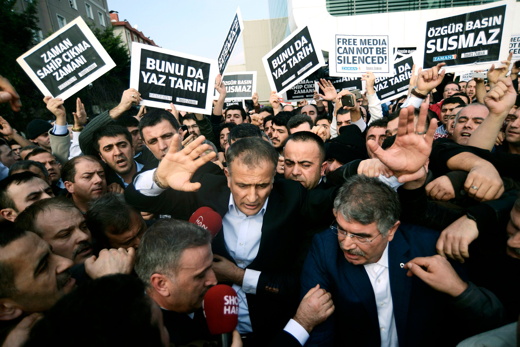 The Turkish government has arrested 150 journalists; in response to bitter condemnations, President Erdogan says the arrests are Turkey’s business.

The man who is seen in the picture above raising his right hand is Ekrem Dumanli, the editor-in-chief of Zaman newspaper, Turkey’s widest circulating daily.

That is the lead of a report by Sharq daily on December 17 on the arrests by the Turkish government of journalists and the uproar it has caused inside and outside the country. What appears below is the translation of the report followed by the reaction of President Recep Tayipp Erdogan to the barrage of condemnations at home and abroad:

Ekrem Dumanli and a host of fellow journalists should be put behind bars in order for the government of Prime Minister Ahmet Davutoglu not to be harmed, although the prime minster seems to have faded into the background these days and President Recep Tayipp Erdogan is said to be behind all these developments.

A while ago the Turkish government passed a bill in parliament to tighten its control over the media, something which will help it reach its intended objectives much more easily.

The government has rejected as destructive the performance of many independent media outlets and has arrested about 150 citizens who are active in media circles. Some Turkish newspapers have denounced the government decision as bulk arrests [of journalists].

The mass arrests of journalists in Turkey have sparked a firestorm in Europe. Turkey no longer hopes to join the EU; rather, the go-it-alone policies adopted by the ruling Justice and Development Party (AKP) show that the country seems to be dreaming about a return to the days of the Ottoman Empire.

Erdogan: It is nobody’s business

President Erdogan showed bitter reaction to the EU’s condemnation of the arrests and said, “This question has nothing to do with European Union officials. The arrest of journalists does not run counter to the principle of press freedom”.