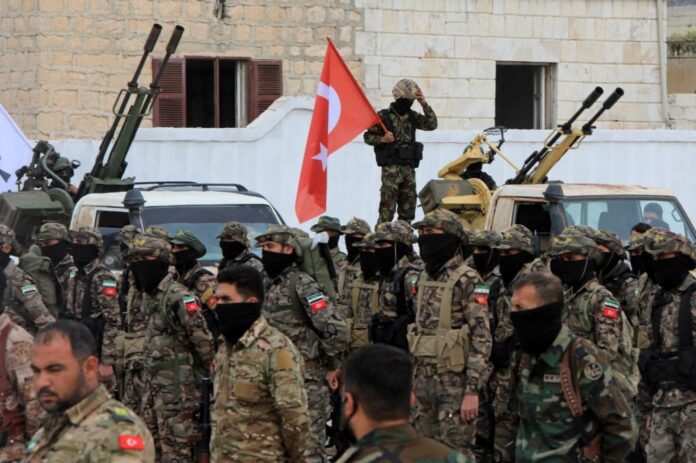 Ankara and Moscow are negotiating to stage a Turkish military operation in Kobane to clear Kurdish fighters from the Syria’s border town, sources familiar with the issue told Middle East Eye.

Turkish President Recep Tayyip Erdogan said last month that Ankara had lost patience due to sporadic attacks by the YPG, also known as the People’s Protection Units, against the Turkish forces and Ankara-controlled areas in northern Syria.

“We are determined to eliminate the threats emanating from Syria with our own means,” he stated in televised comments, adding, “We will take the necessary steps in Syria as soon as possible.”

Since then, Turkish and Russian officials have been negotiating a deal to address Turkish concerns with regards to the YPG, which Ankara considers a terrorist group due to its direct links with the PKK, a designated terrorist group according to Turkey, the US and EU.

Ankara and Moscow signed a previous deal in 2019, where Russia committed to pull YPG forces from the border area, a promise yet to be upheld by Moscow, according to Turkish officials.

Turkey aims to close the western part of the border by seizing Kobane and linking Turkish-controlled areas Jarablus and Tal Abyad.

Kobane was the site of a major battle between the YPG and Islamic State forces, in which the Kurdish group backed by US air strikes repelled a siege by IS militants in late 2014 and early 2015.

Kobane has been held by the YPG since 2012, while Syrian and Russian troops entered the border town during an earlier Turkish incursion in 2019.

According to a draft deal, sources told MEE that Russia would maintain its presence in Kobane, also known as Ayn al-Arab, while Ankara would capture the surrounding areas towards the strategic M4 highway.

Turkey wouldn’t deploy its allied Syrian National Army forces to the city and there would be joint Turkish-Russian control on the M4. Turkey would also maintain the security of the Russian base in Sarrin by not placing the Syrian forces in the vicinity. In return, Russia would make sure that YPG fighters would withdraw southwards.

However, according to the same sources, Russia has tied the Kobane operation to some concessions on Idlib, where Moscow eyes Arihah, the Syrian town that sits on the M4 highway. It isn’t clear whether Ankara is willing to cede territory in Idlib where millions of Syrians are stuck in a comparatively smaller area, dense with military installations and militant groups.

Turkish officials, speaking to Bloomberg last week, announced that Turkey was considering leaving some small parts of Idlib to Russians to get support for an operation in northern Syria.

Sources told MEE that the negotiations with Russia were still underway and Erdogan would need to sanction any deal before launching a military operation.

“It is a political decision at the end of the day,” one of the sources added.

Separate Turkish security sources, on the other hand, told MEE that the military had nearly completed its preparations for an initial incursion in northern Syria.

“We also nearly finalised our deployments in Idlib as well to protect the area against Syrian regime and Russian attacks,” one of the sources said, noting, “Our experiences in the past suggest we should be militarily ready in Idlib even if we have a deal with Moscow because of our past experiences with Russia.”

Security sources said the military could progress with any possible operation in northern Syria within the same day. However, more time might be needed to complete the deployments.

Russia meanwhile continues to play hardball with Turkey. Last weekend, Russian jets continued to hit Turkish-backed Syrian National Army headquarters in the Afrin region, which was only a couple of kilometres away from the Turkish border.

Russians also deployed four Su-35s to Qamishli airport last Thursday, indicating that it is against any possible Turkish operation in this area.

A Turkish defense ministry source, in a meeting with Turkish media, said that only one Russian warplane landed in Qamishli and left the same day.

“It wasn’t a permanent deployment,” the source added.

Turkish security sources indicated that Ankara was also interested in the Tell Rifaat pocket controlled by YPG in northern Aleppo, where occasional rocket fires and attacks killed or injured a number of Turkish and Syrian National Army forces. However the Russians, concerned by the security of Aleppo, were against Turkey’s wishes.

“What Russia is offering is joint patrols in the area,” one of the sources continued.

Two Turkish police officers were killed and two others were wounded after an attack reportedly carried out by the YPG in Azaz, where Turkish forces control Syrian territory, the Turkish interior ministry said last month.

Turkey launched its first military campaign into Syria in 2016 as an attempt to create a buffer zone between its territory and land held by the US-backed Kurdish forces.

Ankara then carried out two other operations against the YPG, one of which targeted the Afrin region in 2018.

Tensions have risen recently as Turkey has stepped up its military campaign against Kurdish forces in both Syria and Iraq.