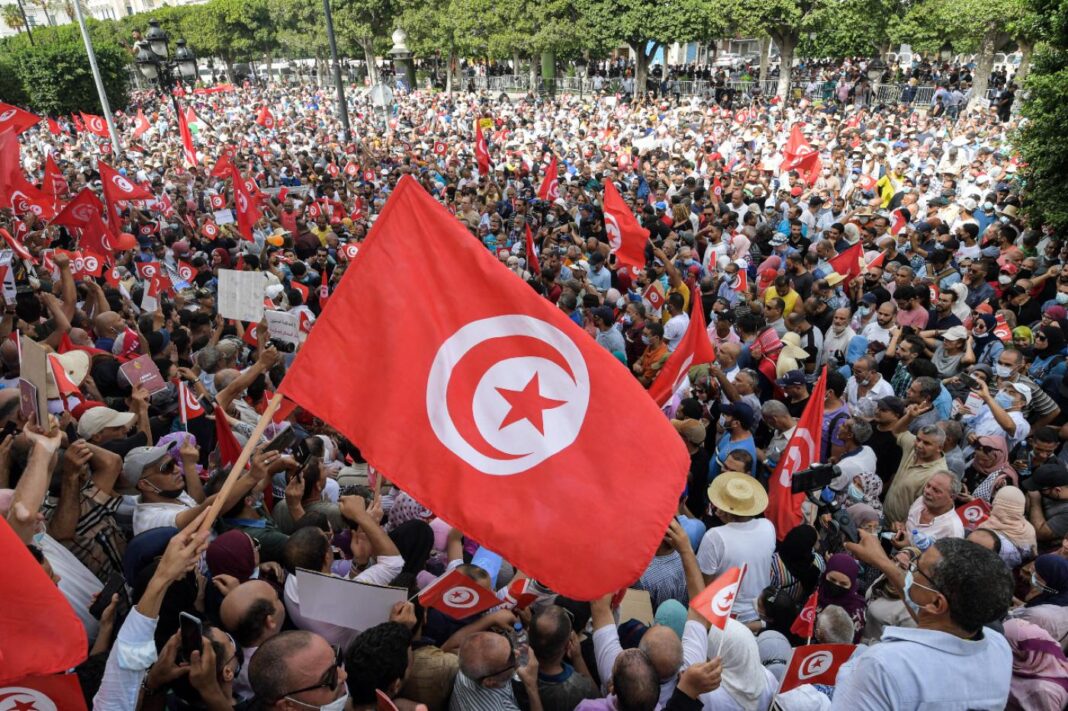 Thousands of protesters have rallied in Tunisia capital –Tunis- to express anger over President Kais Saied's ‘power grab’, calling on him to resign.

Demonstrators gathered on Sunday in the centre of Tunis along Habib Bourguiba Avenue under a heavy police presence to demand his resignation, chanting, “The people want the fall of the coup.”

Brushing aside much of the 2014 constitution, Saied gave himself the power to rule by decree on Wednesday, two months after sacking the prime minister, suspending parliament, and assuming executive authority.

About 2,000 people attended the rally in front of the iconic National Theatre, historically home to all the major demonstrations in Tunis.

“I’m really, really angry,” said Soumaya Werhani, a 30-year-old student amid the roar of the crowd and the sweltering heat, adding, “We are demonstrating to denounce the president’s decisions to stop the constitution and his coup against state institutions.”

About 20 global and Tunisian human rights groups issued a statement on Saturday condemning the move as a “power grab”.

The signatories argued the decree, which strengthens the powers of the president’s office at the expense of those of the prime minister and parliament, is “implicitly abrogating the constitutional order in … a first step towards authoritarianism”.

Belgassen Bounara waved a copy of the 2014 constitution that Saied plans to rewrite. He came from Tataouine, in southern Tunisia, a poor region forgotten by the state.

The computer salesman said he came to demonstrate because “Saied wants to get rid of the constitution and our democracy. He is taking us back into dictatorship”, Bounara told Al Jazeera.

Sunday’s protest was the second since Saied dismissed the government and suspended parliament on July 25.

However, Saied’s move has the consensus of large swaths of the population, who see his actions as necessary to address a crisis of political paralysis, economic stagnation and a poor response to the coronavirus pandemic.

On the other side of the street, a small but vocal group of Saied supporters chanted, “Kais Saied is good”.
“The decree is nothing important, the Tunisian people want a clean, honest president who doesn’t steal from the people,” artist Mohamed Khaled told Al Jazeera, adding, “It’s stressful. People just want to fill their shopping bag and eat.”

Cherif El Kadhi, a former parliamentary officer, told Al Jazeera the demonstrations were a sign that Saied’s actions are loathed as much as they are accepted.

“These protests I think will continue to gain momentum depending on the economic situation,” he said.

“It’s quite clear Tunisians are fed up with the political elite 10 years after the revolution,” which is why they have put their trust in Saied, a former law professor, he added.

However, discontent could lead to more protests in the coming weeks and months, he continued.

Tunisia’s largest political party, the moderate Islamist Ennahdha, decried Saied’s moves as “a flagrant coup against democratic legitimacy”, and called for people to unite and defend democracy in “a tireless peaceful struggle”.

Ennahdha is itself grappling with internal dissent after 113 senior party members announced their resignation on Saturday. They blamed the head of the party, Rachid Ghannouchi, and his entourage for failing to form a united front to oppose Saied and confront the country’s political crisis.