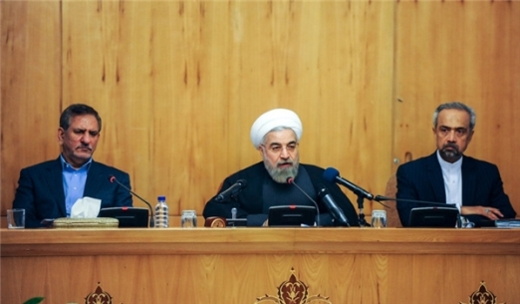 “Under the circumstances prevailing in the world today and with all the dangers threatening the Muslim world, the Shiite and Sunni Muslims are necessitated to side with each other and we should stand hand in hand to create unity in the Muslim world,” Rouhani said, addressing a cabinet meeting on Wednesday.

He cautioned that those outside the Muslim world are widening natural and theoretical differences among Muslims to stir religious and sectarian strife in a bid to block the region and the Muslim world’s development.

In relevant remarks in November 2013, Supreme Leader of the Islamic Revolution Ayatollah Seyyed Ali Khamenei urged the Muslim Ummah (community) to increase vigilance as enemies of Islam are hatching plots to stir sectarian strife among them.

“A major problem of the Muslim World today is the imposed, intentional and wicked problem of kindling differences among the Muslim Ummah and (Islam’s) religious sects,” Ayatollah Khamenei said addressing Hajj officials in Tehran.

“The confrontation (that the enemies are trying spark) among the religious sects will not be limited to the Shiite-Sunni confrontation and if the enemies of Islam can institutionalize these confrontations, they will put on their agenda sparking internal differences inside the different Shiite sects and Sunni sects,” Ayatollah Khamenei said.