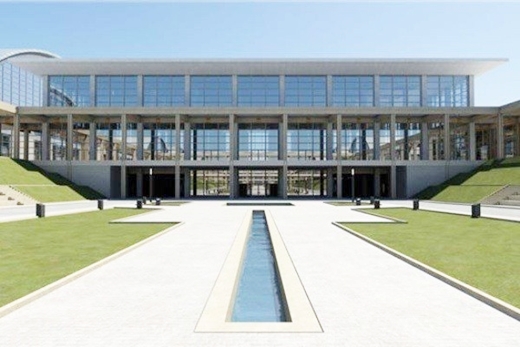 Deputy Culture Minister for Cultural Affairs Seyyed Abbas Salehi, who is also the director of the Tehran International Book Fair, has said that the event will experience a new atmosphere this year at Shahr-e Aftab, a newly-constructed fairground in southern Tehran.

He made the remarks on Sunday May 1, during a press conference held after a visit by journalists to the fairground, which will host to the 29th edition of the cultural exhibition from May 5 to 15.

He regarded Shahr-e Aftab, covering an area of more than 300,000 hectares, as a good and suitable location for the fair.

“It is a good place for a big cultural event, and the fairground itself will be launched with the opening of the book fair,” he added.

“From now on, Tehran’s citizens will possess a city of culture and books,” he said, adding that the officials are well aware of the current deficiencies of the fairground and that they will do their best to remove these obstacles in the coming days.

He further noted that after all these years, the Tehran Book Fair is proud to have finally become a landowner, having found its own permanent space.

Salehi explained that, based on the agreement with Tehran Municipality, the fairground has been dedicated to the book fair for the next ten years.

“The location has been constructed specifically for the fair, and we are happy that when the fair ends on May 15 this year, we will be able to begin planning for the next edition of the fair right away. In previous years, we were never about the location of the next fair,” Salehi explained.

He added that there are good number of buses and taxis situated in major city squares which will carry passengers to the fairground, while Tehran’s Metro Line 1 will also take passengers directly to the venue.

“Russia is the guest country this year, and will be attending with large numbers of officials and writers, some of whom will arrive in Tehran today. Officials from the former guest countries of Oman and Italy will also attend the fair again this year,” he asserted.

There are also several more officials, publishers and writers who will be visiting the fair, from different countries such as Kuwait, Algeria, Germany, Spain and India, he concluded.

This  photo gallery, courtesy of Tasnim, gives an idea of the size and scale of the exhibition centre, located to the south of Tehran.