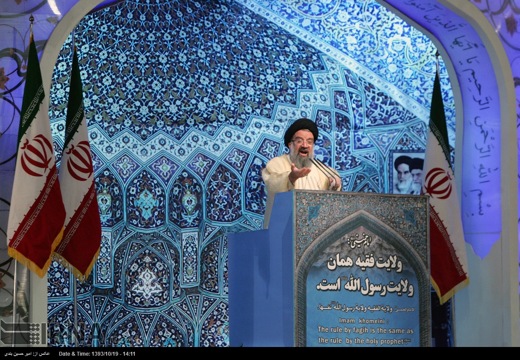 Ayatollah Ahmad Khatami condemned the deadly attack in France and said Islam does not approve of killing innocent people.

The Friday prayer leader of Tehran Ayatollah Ahmad Khatami has strongly condemned Wednesday’s terrorist attack in Paris and said, “Islam does not approve of killing innocent people, whether in Paris, or in Syrian, Iraq, Yemen, Pakistan and Afghanistan. The following is the translation of part of Ayatollah Khatami’s sermon as reported by the Islamic Republic News Agency (IRNA) on January 9:

In comments aimed at Western powers, the Friday prayer leader said, “These terrorists are part of a problem of your own making. They live off the political support you and your allies lend them.”

He urged Western powers to quit mischief and said the approach the West has followed in the past decade – support for terrorists – leads nowhere and should be abandoned.

Ayatollah Khatami also criticized the Bahraini government for its heavy-handed tactics in dealing with the peaceful protests of its people.