Tayyebnia and Seif Positive about Growth Rates and Inflation 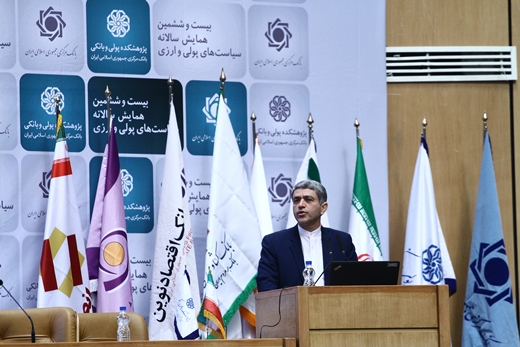 IFP: Economic Minister Ali Tayyebnia and Governor of the Central Bank of Iran Valiollah Seif both addressed the 26th Annual Conference on Monetary and Exchange Rate Policies, held in Tehran on May 24. Tayyebnia spoke about the problems and opportunities facing the economy as it emerges from sanctions, with a detailed look at the banking sector and SMEs, as well as warning against political interference derailing the economic recovery. Seif addressed the issue of inflation, announcing that the rate will soon be less than 10%, down from a 2013 high of over 40%.

As Iran is slowly moving closer to the single-digit inflation after years of hyperinflation havoc, policy and decision makers are focused on stimulating growth and creating jobs for the younger generation.

However, cautiousness about sustaining the hard-won success of taming inflation makes the economic team of President Hassan Rouhani think twice before embarking on any quantitative easing program.
Exploring such themes were the main points of debate at the opening day of the 26th Annual Conference on Monetary and Exchange Rate Policies in Tehran on Tuesday May 24.  It brought together senior bankers, officials and financial experts for one of the most important events of the year.
Other themes of the event included: “Integration of the financial system,” “Establishing effective corporate governance,” “Exploring ways to facilitate the principles of the ‘Resistance Economy,’” and “New methods of financing the economy,”
Minister of Economy Ali Tayyebnia said the two most urgent issues for the government are tackling the credit crunch and reducing government debt, estimated at 1 quadrillion Rials ($29bn) only to the banking system.
“The other priorities are overhauling the banking system and financing SMEs through loans,” he said.
Sounding an optimistic note for the economy in the current fiscal year that started in March, Tayyebnia said conditions are in place to achieve the oft-mentioned 5% GDP growth.
“This year marks the beginning of the end of the zero growth era, as the country is in a unique position to achieve decent growth and generate jobs,” he said.
Tayyebnia, a close aide and confidante of the president, elaborated on the unique position, saying that domestic manufacturing will certainly be helped by factors including the landmark nuclear deal signed in January between Iran and world powers; the positive macroeconomic outlook forecast by leading international institutions and local economists; and the strong momentum shared by key players in embracing Resistance Economy.
Resistance Economy is a series of tenets proposed by Leader Ayatollah Seyyed Ali Khamenei to curb reliance on oil export revenues, empowering domestic producers and diversifying non-oil exports. Since the guidelines released in February 2014, the Rouhani administration has come up with plans to help achieve these goals and make the economy resistant to and resilient against external shocks.

Tayyebnia sounded the alarm on some issues that he said could create serious challenges to economic growth and stability. In particular, he warned about “political polarization” which could put factional interest before national economic prosperity.
“I plead with all political factions not to take aim at the country’s economic and business climate to score political points and make electoral gains,” he said, warning of the potential divisiveness that could lead to acrimonious behaviour ahead of the next presidential election in 2017.
He also expressed concern about insidious attitudes to cast doubts on the positive economic landscape this year, saying it could derail efforts to finance businesses and achieve sustainable growth rates — two pressing needs of the struggling economy emerging from years of international sanctions and endemic mismanagement, not to mention rampant corruption.
He considered the high cost of borrowing money, the faltering conditions of local banks and their balance sheets, the flow of bank resources into unproductive sectors, and the high ratio of bad loans and toxic assets, which account for 42% of banks’ total resources, as the most pressing issues of the banking system and the economy at large.

Governor of the Central Bank of Iran Valiollah Seif, the second keynote speaker at Tuesday’s event, announced that the country will tame inflation and reduce it to single digits by the end of summer.
Inflation has declined from 40.4% in October 2013 to 11.2% this April. The progress was largely due to the government decision to stop using resources of the CBI and other banks to fund development projects, he said.
“Our main objective is now to preserve the low inflation rate and keep it at that level,” Seif said, adding that CBI monetary policy is in line with greater economic needs. He reiterated the CBI’s commitment to and belief in prioritizing the financing of SMEs and upholding monetary discipline.
On the sharp decline in crude oil prices over the past two years, Seif expressed satisfaction that a damper had been put on the related difficulties, thanks to the lifting of the sanctions and the CBI’s monetary policies. Despite the problems emanating from cheap oil, “Signs of economic recovery became visible last winter and are expected to gather pace this year.”