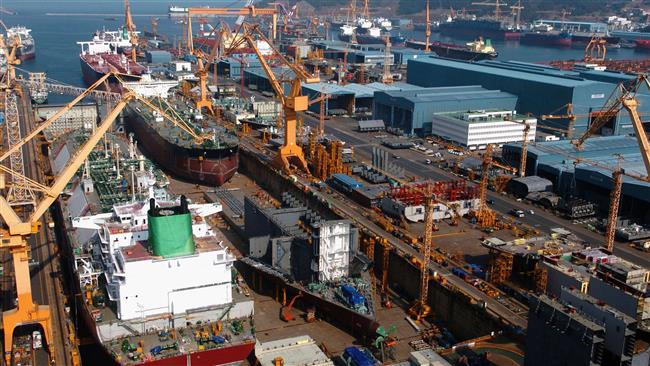 The company announced in a statement that it had sealed the deal with Iran’s Industrial Development and Renovation Organization (IDRO) affiliated to Iran’s Ministry of Industry, Mine and Trade. It added that a joint company would be accordingly established to develop a shipyard in Iran.

The joint venture company will engineer and build the types of ships needed by Iran, the DSME said.

The company further added in its statement that the deal will help it make inroads into Iran’s shipbuilding market and export the related equipment.

The DSME further emphasized that the Iranian side wanted financing from the South Korean government as well as shipbuilding-related technology and know-how.

No details further were provided on the deal including its estimated value.

Since 1983, the DSME has delivered 38 ships valued at $1.65 billion to Iranian companies, including the Islamic Republic of Iran Shipping Line (IRISL) and the National Iranian Tanker Company (NITC), based on media reports.

The media reported in June that the South Korean shipbuilder was negotiating with Iran over a deal worth above $1 billion for construction of at least five jack-up oil drilling rigs.  While the fate of that deal is still not clear, the DSME was stunned earlier this month when it saw its domestic rival Hyundai Heavy Industries sign a major agreement with Iran’s IRISL for construction of 10 ships.