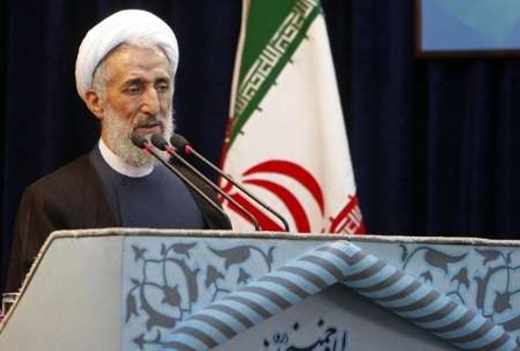 Tehran’s Friday Prayer Leader has said that Iran is seeking to counter ISIL, but the West, led by the US, is supporting the terrorist group.

Tehran Friday Prayer Leader Ayatollah Kazem Sediqi appreciated the government’s endeavors over the past two years, saying that it has taken proper measures in various fields.

He addressed the worshippers on Friday and said that Government Week is an opportunity to commemorate the two eminent martyrs, [former] President Mohammad-Ali Rajaei and Prime Minister Mohammad-Javad Bahonar, who served people sincerely and led a simple life despite their high positions.

As for the performance of President Rouhani’s government, he said that the Cabinet has taken positive steps to curb inflation and counter currency fluctuations, adding that the public health plan are among other outstanding works of the government.

He noted that the government has also managed to get the nuclear deal to a conclusion.

Today, the US and its Western allies are spreading violence across the world and trying to distort the image of Islam, he said, adding that Iran is seeking to counter ISIL, but the West is supporting the terrorist group.

On regional developments, Ayatollah Sediqi said that the issue of Yemen should be among concerns of the “dead” UN Security Council and “useless” United Nations.

A nation has come under fire by an aggressive government, but unfortunately they are just lookers-on, he added.

Free people are behind bars in Bahrain for just seeking to have a share in the government, he said.

The Americans, Brits and the Zionists want Iraq, Syria and Yemen to split, he said, noting that they are after weakening Muslim nations.